This campaign, connected across all three mobile operators as well as online via mixi and Facebook, launched in January with a little stumble noted in early spring. Now, with the so-called Vol. 5, they have released some decent user stats too. We thought you might enjoy the promo video, image linked below, which caught our attention during the baseball game on TV last nite! [Eds]

The collection etc. to which can repetition play, and an original, digital figure are collected with coins automatically collected with the passage of time collect the support of a lot of repeaters, and the use frequency has been increased well. “[Sugoi] vending machine” is an application program that makes the vending machine of the Coca-Cola a motif. “Lottery number” in which a gorgeous commodity is hit and “Original, digital figure” come out if a virtual coin is turned on, and the purchase button of a favorite drink is clicked. 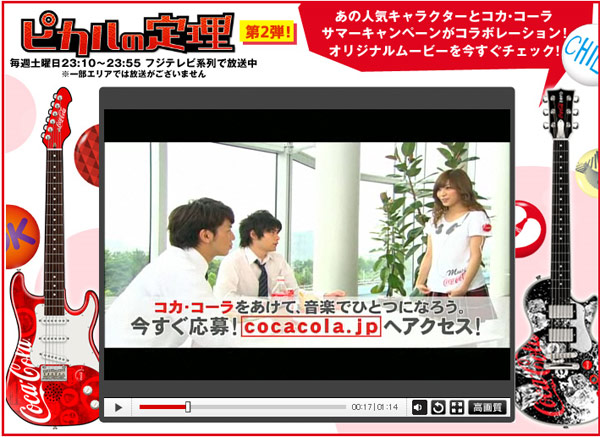 There are 157 all kinds of original, digital figures, and in the inside, is a rhea figure not hit easily either. It is also possible that it is possible to arrange as one’s own collection, and collected figures and friends show it each other.

Moreover, a portable headphone or the Coca-Cola of audio Technica between July, 30th through August, 26th, 2011s The campaign that a lottery number that one case (24) hits or an original, digital figure is hit every day.

Outline of the Campaign

Please access coca cola park (http://c.cocacola.co.jp/svm/), mixi(http://mixi.jp/run_appli.pl?id=28835) or facebook(http://apps.facebook.com/sugoijihanki/) for the period by the personal computer, and do the new registration. There is no necessity of the new Affiliate registration when the member of the coca cola park, mixi or facebook has already been registered. 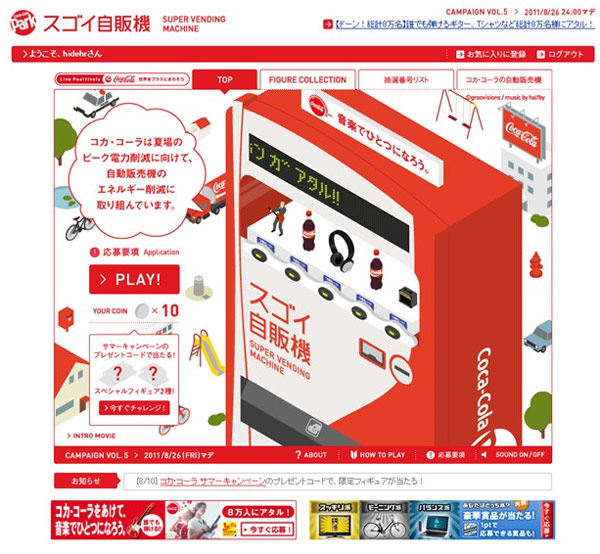 I will present an original, digital figure at random.

- Please acknowledge being not able to assume the responsibility about connected trouble when it communicates.
- The coca cola park cannot register the member in less than 12 years old (11 years old or less), and the guardian must register.
- I will limit the member registration of the coca cola park to the person who lives in Japan.
- Application receipt period

I will present the following prizes by lot.

I will present 1 piece of 159 original digital figure all kinds of arranged on “[Sugoi] vending machine” application program at random.

In addition,If the present code issued after it applies of the prize of the coca cola summer campaign is input on the campaign page of the [sugoi] vending machine now for the following campaign periods, an original figure of the limitation is hit in lot.

It takes notes of “Present code” (14 figure digits) issued after it applies of the campaign in the coca cola summer, and it accesses the campaign page in the [sugoi] vending machine.
- STEP2:

The present code of which it takes notes to “Present code” input page is input and it transmits.
- STEP3:

Lot will be done, and the result turn out then and there. The elected figure can be confirmed from the figure list on a my page.

ã€ notes ã€‘
- It becomes an application the present code once.
- Being able to input the present code by the [sugoi] vending machine campaign It becomes it until 9/4 (Sunday) 23:59. Please acknowledge not applying after it ends for the period.
- The elected figure can be confirmed from the figure list on a my page.
< Present it to all campaign participants >

I will present 2,000 parks G to everybody from whom it participated in the campaign by the application deadline from 0 o’clock August 10 to 24 o’clock August 26.
- Giving park G schedules September 2.
- Recommended environment
[ Personal computer ]

It is as follows of recommended environment.

- It is necessary to install Flash Player version 9 or more on this site.
Please enjoy Adobe Flash Player of the Adobe Systems Co. after it downloads, and it installs it.
[ Cellular phone ]

- It is possible to participate from the cellular phone in the coca cola park and the mixi application program.