Interview with CEO of Mobile Healthcare

We’ve followed James progress here over the years, since our early video interview with him, noted this article via Wharton: http://bit.ly/jqMz1B

Love the tagline: ‘Entrepreneurship Is about Sacrifice’.. he’s been at it here as long as we have! [Eds] 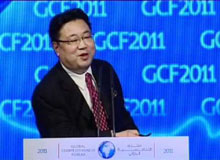 James Nakagawa never studied medicine, and until 2003, he headed a company that helped financial firms deliver online trading services. But after his friend was diagnosed with diabetes, Nakagawa set his mind to create a new tool for healthcare. He launched Mobile Healthcare Inc., and developed Lifewatcher, a mobile tool that allows one to instantly manage and monitor their health. The Canadian’s innovations have earned him various accolades. He is a 2009 World Economic Forum Technology Pioneer Award winner in healthcare, the recipient of the Red Herring 100 Asia Award in Hong Kong, and was a finalist for the Asian Wall Street Journal Innovation@Entrepolis Awards. He and his wife also developed and operated Japan’s first comprehensive cancer patient support site.

Speaking to Arabic Knowledge@Wharton at the recent Global Competitiveness Forum in Riyadh, Saudi Arabia, Nakagawa relates his experiences as an entrepreneur in the healthcare industry, the lessons in leadership he learned from launching companies, and the sacrifices one makes to establish a venture. See the edited transcript of the full Interview Here.