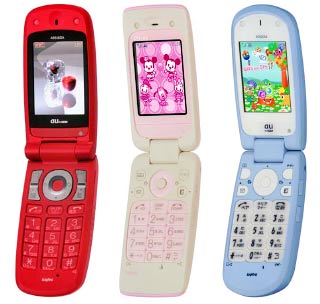 Building on the original teen-targeted Sweet handsets first introduced in January 2005, the companies have just announced three new models for release starting 1 February. One of the key features included in the first series was a GPS-aided application that included user location data in email sent from the phone (so that parents would know whether young Yukiko-chan was actually at juku (cram class) — or not). The second gen of these handsets goes a few steps further to include that function as well as the new Voice Input application and Hello Messenger, for starters. The latest CDMA 1X (3G) Sweet-series all have 1.3-megapixel cameras, are both BREW- and Flash-enabled and include a built-in security buzzer that boasts a screaming 98dB alarm in case of emergency.

Perhaps the most interesting new feature that was announced, and missed by most other mainstream media, was the new OCR feature. You use the phone’s camera to scan text, such as an email address, URL or phone number, which can then be easily added to the onboard address book; this is a very handy feature. There is also a new “Camera Dictionary” BREW application that will also scan — and translate — English text into Japanese kanji characters as well. Now that is Sweet!

Safety features for children is a growing market niche and this series should prove very popular with both youthful customers and their parents.

Following KDDI’s announcement last October 25th introducing Japan’s first ‘One-Seg’ digital-TV-enabled handset to the domestic market, and the first deployment of a push-to-talk-type service (including real-time text, photo and voice), the carrier’s 3G au brand is still setting a strong pace, as evidenced by the latest TCA numbers; in December 2005 they attracted net adds in the high-300,000 range once again (although DoCoMo is now the monthly market leader for new additions to its FOMA 3G service).

With only two FeliCa-enabled units now in their line-up, look for the next handset trio to be launched early in 2006 to include IC chips and e-wallet functionality, one of the main features that has enabled DoCoMo’s FOMA to pull into the No. 1 spot in monthly net adds.

Meanwhile, according to the inside hush, the next few weeks will see yet another major commercial content tie-up involving KDDI, like last summer’s popular Star Wars Auction campaign.

Sanyo’s expertise in handset GPS technology, gained through several years’ experience working in that area with KDDI, recently paid off with their first-ever order from market behemoth NTT DoCoMo. According to Japan’s telecoms ministry, over 40 percent of all calls to the 911 emergency service are made from mobile phones, thus the government has ordered that all handsets sold after 1 April 2007 must have GPS functionality; this implies that all carriers would be placing device orders based on the new regulation right about now. WWJ guesses the folks at Sanyo will be busy this year!