East Japan Railway Company (JR East), NTT DoCoMo and Sony today announced they will offer a new service combining DoCoMo's Mobile FeliCa smart-card handset with JR East's Suica card starting in January 2006. The "Mobile Suica" service will enable FeliCa-enabled i-mode handsets to be used as Suica cards to board JR trains and make purchases in station shops and kiosks. With the news, two services that started as competitors for ecash settlement-on-the-go appear to have buried the yamakatana. Train-riding, phone-using consumers will have little excuse not to use FeliCa now. The companies said a test of the service will begin March 2005 using pilot i-mode FeliCa handsets.

You can think of DoCoMo's newest handsets as "901i lite." The cell carrier hopes four, slim 700i handsets will sing and dance their way into ever-stingier consumers' hearts and wallets. They are packed with would-be FOMA functionality minus the FeliCa e-wallet and could just provide a significant competitive advantage at a time when KDDI and Vodafone are still rushing to market with fully featured 3G battleships that command heavy-duty prices. Sometime-WWJ commentator Ken Gai's take on the move is that Big D is merely launching a shrewd counter-attack on KDDI/au... and will use this series as launch pad to boost migration to 3G -- perhaps even passing KDDI for total 3G subs by Christmas. But WWJ wonders: What else are they afraid of? The 700i-series handsets are packed with FOMA functions: Chaku Uta ring tones, Chaku Motion ring videos

According to the company, NTT DoCoMo will participate in 3GSM World Congress 2005, an exhibition of the latest telecommunications technologies, services and R&D. The event will be held 14-17 February 2005 at the Palais des Festivals et des Congres in Cannes, France. The company says it will exhibit its world-leading 3G services, which are based on W-CDMA technology. Visitors can enjoy demonstrations of videophones and movies on the latest FOMA 901i-series terminals, learn about the technology supporting 3G networks, and see i-mode FeliCa mobile phones equipped with contactless FeliCa IC technology. NTT DoCoMo will also provide touch & try demonstrations of 3G services.

Japan's Big Three cellcos, NTT DoCoMo, KDDI, and Vodafone, released their Oct-Dec 2004 quarterly financials in the past fortnight, and there's a lot of information to be digested. If the endless listings of multi-billion-yen profits bore you, then it might be interesting to take a look at some of the new technologies, service models, and data tariffs that were announced along with the financial results.

DoCoMo just announced they will start selling the N901iC [.jpg image] 3G FOMA handset, the latest model in the 901i-series, nationwide on 28 January 2005. The 901i-series offers surround-type 3D sound for vivid ringing melodies and realistic audio effects when playing i-appli games or using other applications. The N901iC also has FeliCa smart-card technology for e-money, ticketing and other handy mobile functions.

JCB, a leading international payment brand, will start a three-month pilot project for its mobile infrared credit payment system on 29 November 2004 under the name "JCBeam Trial." JCB is actively moving ahead with both contactless payment and infrared payment systems. JCB participated in KDDI's Kei-Credit trial and in NTT DoCoMo's i-mode FeliCa service preview, both in 2003, and is currently running a trial of the QUICPay contactless payment system using NTT DoCoMo's mobile wallet service. 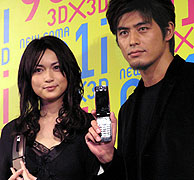 DoCoMo have just launched their next generation FOMA handsets at a splashy event at Tokyo's Imperial Hotel — complete with bikini-clad beauties, big-name stars, and a sound and light show that blasted their five new 901i handsets into the spotlight. The D901i, F901iC, N901iC, P901i, and SH901iC models all come equipped with a 2-megapixel camera, stereo speakers, and enhanced audio and video for even more multi-slacking fun. In a 'Damn the torpedoes, full speed ahead!' press event move, DoCoMo announced that only the SH901iC will be ready for nationwide release on 26 November. Other handsets will 'follow' with no specific release dates given. DoCoMo says sales of FOMA cellys stand at 7.3 million. Sales of i-mode-compatible FeliCa e-wallet handsets stand at 600,000 units; infrared signal-compatible handsets, 27.2 million, and bar-code reader terminals, 14 million. Watch the

The latest word from Tokyo street-level retailers for the Top 20 DoCoMo mobile phones sold between 4-10 November. Sorted by maker, model, and color (and link to product site), this interesting tidbit should give marketers a clear snapshot of what customers are actually buying. It's no surprise that NEC scored 8 of the 20 positions with 6 in the top 10.
« First‹ Previous789101112131415Next ›Last »