Not your usual spam: "Please note attached pictures of Mobile Phone accessories; we are supplying kinsmanship item for buyer in Japan. We [just] did done 12,000,000 pcs for Japan Coca-Cola company, so, I think [these] kinds [of] accessories will find a ready market in Japan." An interesting look at what has to be one of the most profitable businesses related to mobile phones: accessories and customization.

Every so often, it's a pleasure to break from our current wireless Internet and mobile telecoms coverage and take a look into the far distant future to see where mobile technology will take us in the coming decades. Esoteric technologies like super-miniature hard disk drives (HDDs) and 3-D holographic storage systems promise to radically remake the portable devices—phones, PDAs and iPods—that we tote with us every day. In the future, you'll be able to stuff far more data into your cell phone than you can into your desktop PC today; and to my surprise this week, I found out that the far distant future isn't so distant after all.

Samsung, announced that its net income for last year exceeded 10.7 trillion won (US$10.3 billion), making it the first company in South Korea to achieve the landmark figure. Last year, Samsung said it sold 86.53 million handsets worldwide, up 55 percent from a year ago. For all of 2004, Samsung's net income jumped 81 percent to a record 10.7 trillion won. Full-year sales rose 32.2 percent to 57.6 trillion won, the company said.

Foreseeing that demand for 3G phones will get on track in Europe and North America this year, sparking competition with rivals in Japan, Samsung and LG are turning up the heat to market their new 3G models to customers in these regions. Mobile phone makers in Japan such as NEC, Panasonic, Sharp and Sanyo, which have concentrated on supplying W-CDMA phones to carriers in Japan, are also reportedly poised to focus more on global markets this year. 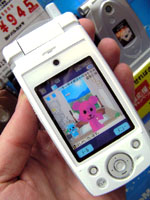 One of the best things about having a few days off over the holiday season in Tokyo is having time to wander casually through Akihabara and check out the latest gadgets. 2005 is shaping up as a showdown year for music-enabled portable devices and I couldn't help but notice how DoCoMo's new 3G handset, the SH901ic by Sharp, really does seem to have at least a slight style similarity to the iPod. As the network speed increases — and with flat-rate packet costs and improved handset technology — critical mass adoption by mainstream users buying even more data seems to be at hand. As competition increases, how will carriers, handset makers and content providers adapt their offerings over the coming year? While it remains to be seen exactly what kind of applications and services will hit the streets, it has become increasingly clear that a race is on. Having both KDDI a

In a report on Unstrung, Justin Springham comments on the significance of this week's KDDI contract awards to Korean and Japanese vendors (reported on WWJ here). Yesterday, Hitachi seemed to beat Samsung's day-earlier deal with KDDI Corp., revealing that it had also secured a CDMA 1XEV-DO Revision-A network upgrade deal with the carrier worth approximately 100 billion yen. Springham writes that: "Hitachi's win eclipses the earlier $800 million deal with Samsung. Reports suggested Samsung claimed to be the sole supplier of Revision A kit to KDDI."

KDDI today announced the schedule for earnings releases for FY3/2005 third-quarter results. Details are on the KDI IR website Here.

The Portable Cellular Phone Booth provides a visual image of social sacrifices and opportunities to interact with one another lost due to our own self-involvement. This 'performance art' retractable phone booth [ .jpg image ] is carried on your back and can slide up and over your head to completely isolate you from society; the action is fast and slick just like the flip action of a cell phone. Via: Gizmodo

In yesterday's WWJ Newsletter, I mentioned the news last month that DoCoMo had developed a software platform for FOMA 3G phones — comprising two options: both Linux and Symbian (sorry Bill!), adding "This is big news." WWJ's ever-keen Digital Media Director Lawrence Cosh-Ishii pointed out last night that, in December 2003, we carried a video report from Big D's year-end presser wherein then-CEO Tachikawa said: "Simply speaking, Microsoft is not offering an open standard and an open minded approach" and that DoCoMo "prefers Symbian and possibly Linux for 3G OS." Never let it be said that WWJ editors miss a chance to say We Told You So!

Tokyo's best and brightest mobilistas gathered for Mobile Monday Tokyo in October, and WWJ was shooting! MoMo is a monthly networking event designed to... well, to get everyone together! What a blast! Folks were there from carriers, handset makers, technology vendors, application developers, and content providers on both the foreign and Japanese side. We spoke with knowledgeable insiders on mobile games, music, and video, and today's episode brings you the highlights. Full Program Run-time: 17:56