As the terminal made of Sony Ericsson for au, “BRAVIA Phone U1″ is a crown model for the first time as for the name of LCD TV brand “BRAVIA” of Sony.

It corresponds to “Going out forwarding” to be able to watch the program recorded with the Blu-ray Disc recorder made by Sony with the cellular phone besides it can watch One Seg by a vivid image quality. It has the waterproof performance of the IPX5/IPX7 grade, and it can enjoy the time of water One Seg digital TV including in the bath. “U” of product name “U1″ is said, “â€œunite, utility, usability” . A formal serial number of the terminal is “SOY02″. 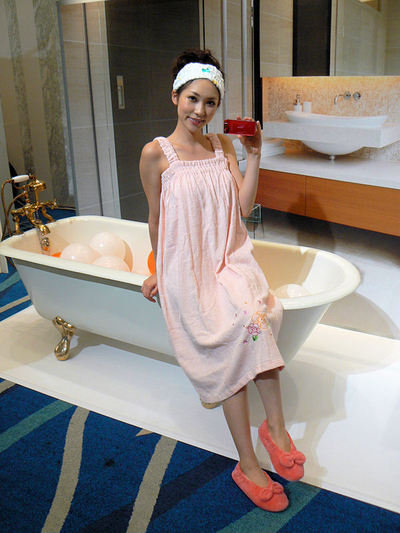 The body colors are three colors (red, the sapphire black, and gold). Red embodied the brand color of BRAVIA. The sapphire black and gold are said, “Arranged it for the cellular phone” though were the bases the color used for the BRAVIA product. Moreover, it is said, “In BRAVIA Phone U1, the vermilion that exists in SO903iTV is pulled out, and to solicit young people’ men and women, the chroma has been raised” though red is a color used also for BRAVIA cellular phone “SO903iTV” that DoCoMo put on the market in 2006.

The accessory is enhanced, too and the USB cable that can be used also for a desk-top holder, microSD in 2G byte, and the going out forwarding bundles it. Moreover, it is scheduled to prepare a useful “Bath cellular phone stand” for the One Seg watching with the bathroom with the optional, and to be sold by “au one Brand Garden” on November 19. The price is 1980 yen. It is a lineup according to the body color of BRAVIA Phone U1 as for three colors. To watch One Seg easily, the stand can adjust the angle by four stages.

It corresponds to abundant image qualities, the tone quality settings, and the frame supplementation technologies. In One Seg, it sticks to “See” function that combines the contrast improvement technology with the outline emphasis technology is installed. The setting of “News”, “Sports”, “Movie”, and “Music” newly became possible though being able to select by the image quality setting of One Seg was only “Sharp”, “Dynamic”, and “Normality” in a current terminal made of Sony Ericsson. News sees the telop easily and the display and sports are said that it will strongly display green because there are a lot of scenes where the lawn reflects.

Cellular phone version “Motion flow Lite” of the frame supplementation technology that can adopt it even by head of the house BRAVIA is installed. 15 frames per second are supplemented to 30 frames. The mobile engine is turned on by the automatic operation, too, if this motion flow Lite is turned on and the image quality setting says that it will become a vivid image “Normality”. Besides this, “Watching mode for a long time” in which a continuous watching became possible for about the maximum five hours by turning off image quality, effect of the voice output, brightness setting, and motion flow Lite was installed.

The voice output effect setting was enhanced, and it became possible to set “News”, “Movie”, “Music”, “Sports”, “Bathroom”, “Natural”, and “Normality” besides DBEX. I come to hear the voice also in the bathroom where the sound echoes easily clearly when setting it to the bathroom.

The program can be transmitted for one hour in three minutes. “Going out forwarding”

The camera is installed 5.14 million pixels CMOS, and corresponds to the face detection, the smile detection, and the blurring correction, etc.”Photo viewer” that can smoothly inspect the taken familiar photograph in the Sony Ericsson terminal is installed, and it corresponds to “Line display of time” displayed in date when the photograph was preserved the order. Moreover, “Digital Photo Frame” is newly prepared in the effect of the music addition slide show. It came to be able to display the calendar and the photograph at the same time. Via Digital Life.