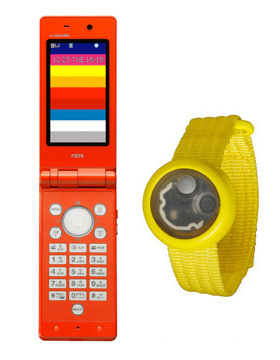 DoCoMo has just announced the F801i, a new child-friendly 3G mobile phone loaded with special features designed for children, will go on sale December 20. Building on the popular FOMA SA800i model that DoCoMo released in March 2006, the F801i offers many new or improved child-friendly features for security, theft/loss prevention, ease of use and more. The phone’s soft-rectangle shape and round speaker grille enclosed by a ring-shape LED were conceived by renowned designer Kashiwa Sato to symbolize safety, peace of mind, creativity and the future. The package also comes with a wristwatch style ‘amulet’ remote which can be used to make a lost phone beep if within a range of about 10 meters. If the handset remains out of the amulet’s range for more than five minutes, a message can be sent automatically to a registered DoCoMo phone.

According to the press release:

An amulet-style remote controller worn by the child can be used to make a misplaced phone beep if within a range of about 10 meters (may vary with usage environment). If the user moves even farther from the handset, the phone can automatically lock (requires presetting). If the handset remains out of the amulet’s range for more than five minutes, a message can be sent automatically to a registered DoCoMo phone.

The F801i is ergonomically designed for easy use by small hands, and its waterproof body can withstand accidental immersion (up to 30 minutes at one-meter depth) or concentrated water sprays.

In an emergency, the child can quickly switch on the phone’s 100-decibel alarm, which produces two types of noise alternately. When the alarm is activated, the phone also emits a bright light that is easily visible to people in the surrounding area.

The phone can be set to automatically notify loved ones when the alarm is activated, and provide the handset’s current location as well. Computer-generated phone calls can be placed to up to three registered numbers and messages can be sent to registered individuals who subscribe to the i-mode location service called imadoco search. In addition, the child can discreetly message their location to a registered imadoco search user by simply pushing a button on the side of the phone.

If the phone’s power is switched off, a presetting can enable the handset to automatically turn back on (in as little as five minutes) and message the incident and the phone’s location to a registered DoCoMo phone.

Most of which can be observed during this hands-on video.