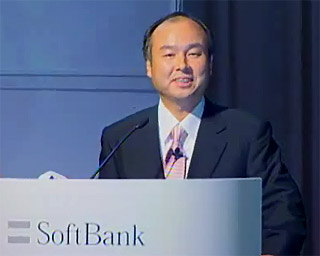 The long summer silence from SoftBank on the rebranding of Vodafone K.K. to SoftBank Mobile is over with no less than 12 press releases issued today in advance of the official launch on 1 October. The company has introduced 13 new handsets, a variety of updated service offerings and new personnel. As mobile number portability (MNP) arrives on 24 October, and with strong competition from market leader NTT DoCoMo and No. 2 carrier KDDI, the struggling former Vodafone franchise clearly needed to get their house in order.

Some little-known news: Industry insiders here were surprised to learn in late August that the long-time head of Qualcomm Japan, Ted Matsumoto, had moved over to SoftBank taking on the title of CSO (Chief Strategy Officer) for Masayoshi Son’s newly minted celco. The official announcement was made during a wide ranging press conference that also introduced Cameron Diaz as the star attraction for their new advertising campaign that planned to blitz TV and outdoor ads over the coming weeks.

As we’ve mentioned here several times here over the last six months, SoftBank Mobile will have its fill trying to rescue the former Vodafone Japan operation, with issues including network coverage and handset line-up on top of the list.

We have seen some small signs over the summer that they indeed are trying to shake things up, including recent announcements offering the HTC smartphone and the Talk – Rock campaign which provides a free iPod Nano to buyers of the Sharp 705sh handset. But today’s blitz is really the first time that the company has unveiled a comprehensive look at what they have on tap.

SoftBank had already mentioned a more aggressive plan to build out the still weak (in comparison to DoCoMo and KDDI) base station network, which was always – and to a large degree still is – the weakest link in Vodafone’s street cred. Also, despite being locked-out of the popular Mobile Suica system at launch in January, it appears that their customers will finally have access to JR’s m-commerce service starting in December.

However, it might not be enough to just get back to a somewhat level playing field with the competition; clearly, they have to get the overall network, handset and service offering up past what the competition are already offering and the latest round of announcements indicates that was the focus of Phase 1. Bringing on Matsumoto-san to guide their future strategy is a clear sign they needed outside help to build a long-term roadmap.

A few notables from the media info overload that stood out to us at first look: The easy, one-button link to Yahoo! (on the new handsets), which will allow users to look at mobile web content made available through the Yahoo! portal, including email, stock prices, news and auctions. We also note that they announced a new Samsung model, the 706sc, which measures in at a radical ultra-thin 12.3mm (compared to the Razr V3x at 19.8mm), and the 910sh handset from Sharp, with a 5 megapixel camera onboard.

No doubt we will be hearing much more from SoftBank Mobile now that they are emerging from stealth mode and rolling into action with brand blazing.

While the latest round of announcements did not indicate anything significant in the way of a price war, which was expected by many, it will be very interesting to see the TCA subscriber numbers for November, which will be released in early December. As we approach the year-end holiday season – and the initial post-MNP subscriber results start coming in – perhaps the market will start to see some increased activity in with respect to pricing strategy.

While it would take some time to dig through everything and look at some of the details, it seems that, overall, the company has been working very hard to turn the corner.