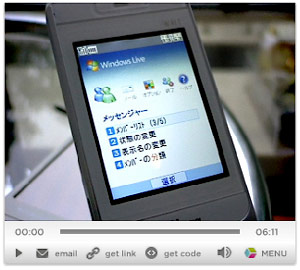 After 6 months of beta offering the Windows Live Messenger official PC version became available for upgrade & download in June this year. Together with this latest release, the company also introduced a mobile Java Appli for DoCoMo customers using FOMA 3G handsets. WWJ met with Ho Chang, Product Manager for Windows Live at Microsoft Japan, to take a test drive on the companies Live Messenger for BREW due to be available on selected KDDI/au devices later this month. Also note, Mr. Chang made a presentation earlier this year to Mobile Monday Tokyo and his powerpoint presentation is available Here.

Just like the PC version, it will enable users to sign-in, exhange text messages – including emicons – with their existing contact list, check and send email (Hotmail), show their online presence and display name all in real-time. According to Ho, the entire certification process took about one-year from their intial proposal to the carrier for planning, testing and product release. However, the final offering is “far more robust than whats available in the U.S.” running a faster network with a larger app. on the latest BREW version. Targeted at flat-rate data customers the app. will not come pre-installed but will be offered as a free download it will be the first Microsoft app. deployed on KDDIâ€™s official menu. Subscribers login for the full program — Runtime: 16:02

The rev. 2 version — now in the early planning stages — hopes to add improved functionality such as image file transfer and voice clips. His closing comments, related to the future of networks and usage habits, demonstrates our shared excitement for the future of the mobile industry.