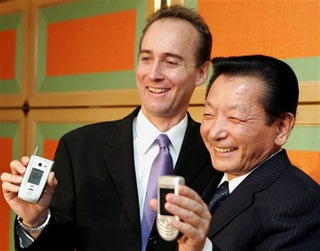 Last week’s announcement of Nokia and Sanyo joining forces to boost their combined CDMA market share in the US was lost in the next-gen mobile TV hype and media avalanche (not to mention complaints about pokey dial-up access from the venue) coming from the 3GSM World Congress. The Nokia-Sanyo combination is an obvious play with both sides bringing a decent value proposition to the table; Nokia has massive manufacturing capacity, established distribution channels and a global brand while Sanyo has proven experience producing ultra-cool high-tech handsets and strong operator/vendor relationships. The companies gave no financial details of the tie-up, which is expected to close in the second quarter, but the JV will be based in Osaka and San Diego with an estimated 3,500 employees.

The challenge — and rewards — of morphing these respective ‘best of’ brands into a unified product offering are significant. Sanyo has advanced mobile battery and GPS chip expertise that even a Nokia would be hard-pressed to build on their own and such technologies are fast becoming key competitive differentiators as the US (and other markets) mandate emergency location reporting and other public safety services. Sanyo was vaulted to the ranks of top-tier suppliers to national champion DoCoMo last year as the name behind some of Big D’s first GPS-enabled models, the SA800i and SA700iS.

A Nokia-Sanyo tie-up makes sense from an economy of scale perspective and the end result should be better hardware for the end user, potentially at a lower price, which should please the operators and — more to the point — their shareholders.

But there are lots of difficulties in making high-tech JVs work; The Sony and Ericsson mobile handset tie-up in 2001 took years to generate any real revenue or increased market share, while — in a closely related area — Vodafone’s 2003 acquisition of J-Phone is still struggling. The challenges are technical, cultural and geographical and it’s not clear that Sanyo or Nokia have any special skills to make their marriage less rocky.

Nokia currently has some 13 percent of global CDMA market share; Sanyo has around 7 percent. For Nokia, that CDMA share is less than one-third of its position in the GSM world and this obviously needs to grow as CDMA 1X and 1X EV-DO carriers in the US, Japan and Korea continue to kick their competitors around with compelling and successful 3G data services.

Meanwhile, Sanyo claims strength in several key areas including well-developed relationships with KDDI, Sprint and Qualcomm, plus years of R&D in embedded GPS technology. The two companies combined will have about a 20-percent market share, making their venture a strong No. 2 behind Samsung.

But what about innovation?

One of the most obvious factors driving innovation in Japan has been hyper-competition. Instead of having one or two dominant players making handsets, we have a dozen slugging it out for market share.

The result has been, for the most part, very high-quality phones produced in lower volumes at higher prices (mostly eaten by the carriers, who benefit from the world’s lowest customer churn and some of the highest ARPUs), with constant kaizen (improvement) pushing the envelope for the next sales cycle.

How will the Sanyo-Nokia combination of local keitai cultural know-how and international mass production capability mesh? We think Sanyo will have to continue creating their custom models for the Japan market but aim to expand their reach in the US, a challenge that will require time, patience and more engineers. Nokia will have to get their massive Euro-user, GSM-centric mindset around an ultra-thin, ultra customized design philosophy, which will require time, patience and more engineers.

But the stars may be in alignment. Sony and Ericsson have ultimately managed to make a go of it when both were struggling along separately, so maybe Nokia and Sanyo can do the same.

Nokia may immediately benefit from Sanyo’s experience in the domestic market; they could use the help.

The big blue machine finally managed to get one handset, the NM850iG, launched with DoCoMo last week and the local press, who must not see the demand for a GSM-capable phone, was ripping it apart, sight unseen. The attacks were directed at everything from the model name not matching DoCoMo’s regular 3G FOMA ’700i’ or ’900i’ series numbering to the lack of an internal camera for video conferencing. And the press may have a point. Vodafone Japan models based on the basic 6630-style design have not been a big seller on Tokyo’s mobile street and there’s little reason to think the 850iG will do much better under DoCoMo.

And if the stars are indeed lining up, our 2006 predictions may continue to come true with additional consolidation among Japan’s handset makers virtually certain. Perhaps Motorola and NEC will make a splash at CTIA; or maybe Samsung will tie-up with Casio, Hitachi or Kyocera?

NOTE: BusinessWeek had some interesting observations about the deal:

Despite years of effort and hundreds of millions in R&D spending, the king of mobiles has always lagged behind in CDMA, which is controlled by San Diego-based Qualcomm. Nokia has long resisted buying CDMA chips from arch-enemy Qualcomm, preferring to develop its own using patents licensed from Qualcomm and others. That meant it was continually scrambling to keep up with the latest enhancements to the technology — and producing phones that didn’t wow customers. Things have gone downhill recently as Qualcomm rolled out so-called “EV-DO” phones with faster data access, a technology Nokia doesn’t yet have.

Nokia will transfer its entire CDMA business unit, including about 250 employees in San Diego, to the joint venture. The diversified Japanese electronics maker also makes CDMA phones and has struggled to get traction and make money in the business. Sanyo’s 7% share puts it well behind rivals such as Samsung, LG, and Motorola. “We think by putting the two together we can get better than one-plus-one equals two,” Nokia CFO Rick Simonson says.

Brand identity hasn’t been disclosed, but it’s likely to include both names for their respective market value. The Nokia moniker will bring visibility and respect to Sanyo’s CDMA line, especially in the developing world, while the Japanese connection could help the rest of Nokia penetrate a market where it has been largely shut out.

On the operations end, Nokia’s wide access to distribution channels could help drive Sanyo’s beefier CDMA phones into new markets. And the joint venture’s greater scale will help it negotiate better prices for components than either company could get alone, while spreading R&D and marketing costs across a broader sales base.

The Valentine’s Day bombshell was vintage Nokia: pragmatic, strategic, and unsentimental. You have to hand it to the Finns. In the middle of the world’s biggest GSM trade show, they shoved CDMA into the past and stepped into an uncharted future.