SoftBank Mobile announces the division hit 30M subs or 2x their base since taking over from Vodafone in 2006! http://bit.ly/MSbqTo

Mondo Congrats to the SBM Team.. Indeed.. we’d like a T-Shirt And a Coffee Cup too! [Eds]

Total Number of SoftBank Mobile Subscribers has Topped 30 Million
Nearly doubled the number of contracts in business for approximately six years from entry into the mobile communications. 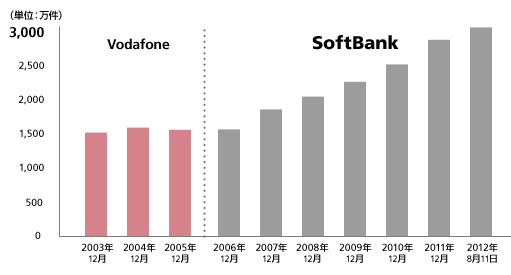 SoftBank Mobile has announced that the total number of subscribers has surpassed 30 million on Saturday 11 August 2012. Since the beginning of the Tokyo Digital Phone Co., mobile phone services in April 1994, and changed over time Digital Phone Group (Hong regional digital, Digital Tu-Ka companies), J-PHONE Co., Ltd., Vodafone KK, Softbank Mobile and while, and now reaches 30 million in approximately 18 years 4 months. Total number of subscribers was about 15 million at the time Vodafone has entered into under the Softbank group in April 2006, we achieved nearly doubled in four months and then about six years.

After entering the mobile communications business in April 2006, SoftBank Mobile, started to provide plan “White Plan” fee simple breakthrough in January 2007, in the spring than in the same year, overwhelming the competition promote the expansion of mobile phone handsets such as the number and color number of models, we have a range of initiatives to strengthen quickly to meet the needs of our customers. As a result, when you first won the top spot in the net increase in the number of subscribers per month in May 2007, then began to lead as the number of net additions in the first year of fiscal 2007, extends the number of contracts has continued steadily. Started sales of “iPad” in May “iPhone 3G” in July, 2008, 2010, as a company “mobile Internet No.1″, pioneered the market of smartphones and tablet terminal ahead of the competition, have driven the Japanese mobile phone market.

And now, as compared with the band radio Softbank Mobile had been held so far, start service radio 900MHz band can cover up to a wide range more efficiently, in the “platinum band” so-called, “SoftBank 4G”, “ULTRA SPEED”, has committed to measures to provide, such as “Softbank Wi-Fi spot”, a communication service even better.