No doubt we’ll be seeing these at CEATEC in earlier October and on the Yamanote-sen before oshogatsu! [Eds] 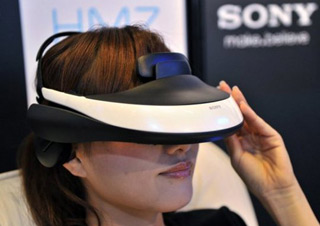 Sony Corp said on Wednesday its new 3D device offers a movie experience that can be had anywhere, with a head-mounted display that lets users also watch videos and play videogames. The sleek, futuristic visor-like headset — not much wider than a pair of sunglasses — covers the face from the eyes to the ears, where there are earphones attached, and weighs 420 grams (15 oz).

The headset can be used for watching videos, listening to music and playing videogames by plugging it into a Blu-ray disc player or game machine. But this pleasure does not come without cost. The HMZ Personal 3D Viewer — which goes on sale in Japan on November 11 — will retail at roughly 60,000 yen. Full story via Reuters.