A Week in the Eye of the Storm

Here – finally – is our post-quake, tsunami and nuclear crisis thoughts from the ground in Japan over the last week http://bit.ly/haavw4

It’s about time for a follow-up to our 311 Report, posted 24hrs after the initial earthquake and tsunami. Now, the challenge for this update is to bring together materials and thoughts gathered during the last week, as you might imagine – it’s been a wild ride. So, let’s focus on three key points: a 10,000ft look of the stories unfolding, a brief overview of the mobile segment within that context and a closing bit about our own personal experiences.

There has been an impressive response by governments, organizations and individuals from around the world – stepping forward with pledges of assistance – as Japan has always done for others in their time of need. These contributions are more meaningful and heartwarming than words could ever express, and will not be forgotten.

This tragic event and the calamity that ensued rightfully grabbed global attention, bumping the so-called ‘Arab Spring’ off front pages around the world. As it stands, the latest hard numbers reported show the official death toll at 8,649, with up to 12,877 still missing and an est. 387,800 people in more than 2,200 shelters. There is obviously real pain in Miyagi prefecture, and our thoughts and prayers are for those affected and their families. We’ve seen everything from a rare address with words of inspiration from Emperor Akihito [in Japanese] to this ‘Save Japan’ spontaneous fund-raiser at SxSW and, of course, Hello Kitty with her call to action.

Sadly, the majority of media focus was devoted to a potential nuclear disaster – so much to the extreme that it prompted this Wall of Shame wiki. While examples run from the not so subtle to the obscene, our favorite is by FOX as reported by Media Matters, with a special fluffy mention going to CNN’s AC360. The massive scale of human suffering was essentially passed over in far too many cases. A reflection point for certain media is that a M9 quake, followed by tsunami of near biblical proportions, was either less valuable or too difficult for them to cover. 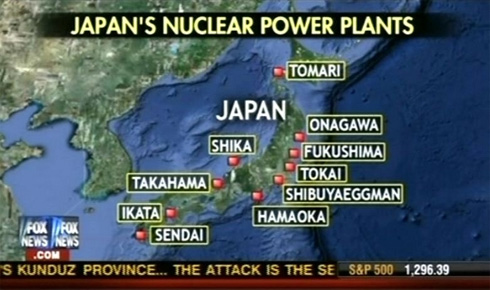 Sure, a radioactive armageddon headline grabs attention – dare we say link bait for page views and ad revenues – however, Rights; Freedom of the press, comes with Responsibilities; accurate and balanced dissemination of the facts. Of course the threat of a silent deadly cloud killing millions should be taken most seriously, more than ever this was an event where reporting ‘without fear or favor’ was needed by society. For those still concerned about the radiation story, this post with updated readings, and what they mean, should help put things into perspective. Trust this David vs. Goliath lesson is not lost on our readers, clearly the 5th estate has started to do some serious soul searching.

That said, we would like to pass along kudos to the LA Times for this slideshow of images from the hardest hit areas, photos speak volumes, and to TBS television for this YouTube page [JPN] with statements from survivors for worried loved ones. Thankfully, several very good examples of journalists reporting the story – we could not agree more with their measured observations.

Of course we realize most of the condensed above, which you may or may not already know, has little or nothing to do with wireless. So, letsâ€™ consider for a moment the role of mobile within this event.

The infrastructure damage was such that at quake impact all mobile networks went offline. We saw services slowly coming back in Tokyo some 6-hours later while the operators began moving mobile cell-site equipment into the hardest hit region, with additional resources from ITU, where damage to the grid was significant. It should be noted that even basic water and power utilities, along with transport and connectivity, were dramatically affected in the tsunami area making it difficult to impossible for friends and family to communicate during the early critical panic days.

As most people there have since moved to safer ground for shelter, with better access to emergency services – including on case by case basis fixed/mobile networks, connections are finally being made. There is a well known and long established process for customers to register, with their telco provider, during disaster situations, see links below. By doing so, no ‘app’ needed so any handset or pc can easily perform this required simple function, friends and family can confirm they have survived the incident.

Also of note, since the 1Seg terrestrial Digital TV tuner is embedded on a majority of handsets, mobile television quickly became a key source of news, especially in those early hours. On a nationwide scale continuous updating reports showed low to no loss of life, beyond Miyagi prefecture, surely putting many minds at ease while unable to get direct messages through. As noted here, there are several popular SNS platforms, with Mixi being the largest by subscribers, and twitter becoming widely adopted as well, where people were able to check friendâ€™s status and post ‘Ok’ updates via fixed-line and mobile broadband networks which thankfully continued to perform more or less intact.

Another notable service in the after-math is DoCoMo Area Mail, which has long been available for free to registered users, providing (hopefully / slightly) advance earthquake warning alerts direct to their phones. While Japan recorded some 300 aftershocks at +5m over 6 days, therefore 50 a day or 2 per hour on average, several folks we know have finally opted to switch-off these continuous alarms. We should also point-out that Big D has raised some $5M so far from customers who have kindly donated their accumulated loyalty points towards disaster relief. No doubt there are plenty of other examples of mobile related fund-raisers; SoftBank Mobile Here and this one by Gree, which shows some $2M from nearly 900k people, here’s a consolidated list [JPN] that came across our radar.

Finally, the wider impact to be expected comes via damage and disruption to the global supply chain. As we have noted many times in the past; while you may not see a domestic brand name ‘stamped on’ handsets overseas, but there’s still plenty of Nihon inside. Critical components are produced en-mass by Japanese companies with estimates ranging well into the 50% level worldwide! Certainly we have already seen a run on parts and pricing as device makers – including for the iPad 2 – calculate existing inventories, shortages and scheduled time lines for their deliverables.

For us here it’s been hectic times, many thanks to family, friends and colleagues for your concern and continued support. That first 24hrs saw hundreds of messages, surely we’re into the thousands by now, our apologies to those we have not responded to. We’ve been out at the farm to pull off all the crops, you never know, and to our local city hall with carefully packed donations headed north. We have stocked-up on candles and adjusted our routines to deal with the rolling blackouts while parsing an incredible amount of data coming from a wide range of new and existing contacts.

There are far too many individual sources who deserve credit for their constant update efforts here over the last week. However, honorable mention goes to NHK World for getting their live feed up on USTREAM, the Yomiuri Daily via Twitter and to Martyn Williams, Tokyo Bureau Chief at IDG, for his continued grace under pressure. Here’s a short list of characters that have been active in keeping our sanity through these challenging times!

We have provided intell. to clients and comments to media, scheduled meetings and re-scheduled our own travel arrangements, while supporting a network of contacts – here and abroad – with a wider than usual range of requests. Tracking the daily briefs with ‘updates’ on the status at Fuchushima has been a frustrating and revealing exercise, as the ‘fluid situation’ finally appears to be coming under control, no doubt there will be many questions to follow in the wake of these extraordinary times.

Here’s a few obvious ones for starters:

1 – Since a major quake – long expected – would likely knock down power lines and be closely followed by a tsunami, when choosing to locate a nuclear power plant beside the ocean wouldn’t it be prudent to have dependable back-up to the secondary diesel power supply? Why did it take one full week to get critical station power back online?

2 – Considering the predictable need by the entire community for actionable information, why did we not see a coordinated effort by government, industry and academic experts to describe key issues with plain language in a detailed and transparent fashion? We trust there be a review to make recommendations for future improvements?

3 – How will Japan compensate for the massive loss costs to regular people in these worst hit areas?

4 – What lessons have been learned to-date that can be applied locally and globally going forward?

For us, we have learned to find new pleasure in the simple things of life which were until recently rather taken for granted as status quo. There are pangs of guilt when we enjoy fresh miso soup with a full bowl of hot rice while knowing so many people are struggling just 200kms away. Only 10-days ago these kind folks were living life as normal, now they have likely lost dear friends, perhaps family members and nearly everything they owned, take a moment to look around where you sit right now and (really) think about that.

We have been impressed to all-new heights by the ‘can do’ spirit of Japanese citizens over this last week. As March 21st marks the first day of spring – it’s a sign! – we fully expect a re-birth, yet again, from the chaos and destruction caused by the Great Tohoku Earthquake. One of the best quotes we saw during these difficult days was: “In times of crisis, you learn the measure of a man”. The same could be said for the character of a country. (Update 03.24: The Island Nation – Shimaguni Konjo!)