Another hectic year for all attending the annual Mobile World Congress confab in Barcelona – a few thoughts from WWJ http://bit.ly/hJUut7 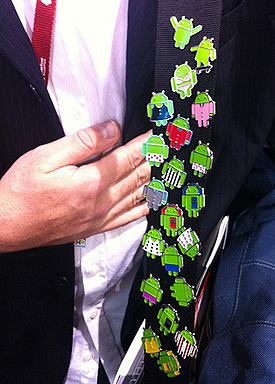 Looking back over past years it was always easy to pick the major themes, however not so much this time around. The weather sucked more than usual while most of the buzz actually came from under-the-hood with Qualcomm announcing their upcoming Quad-Core processor. Sure, there was lots of excitement over the new Samsung Galaxy2 – and the PSP Phone – but if forced to choose.. we’d go with the stealth bling campaign by Google with their limited edition Collectible Android Pins as “By Far” all the rage!

Our highlight moment came on the Wednesday evening, in the backside of Hall 4, when we bumped into none other than Erich Schmidt after his keynote! He was kind enough to shake hands and exchange pleasantries for 30-seconds and we trust that details from our business card will make it onto their Christmas card mailing list..!?!!

Meanwhile, there are plenty of online reviews from Fierce, RCR Wireless and Total Telecom for those looking to dig deeper.. that said, it’s really the full experience of attending the venues in person for hands-on demos and f2f conversations that brings everything into perspective. So, clearly the App Planet in Hall 7 continued to Rock and finally we are seeing the world really waking up to mobile computing – as we’ve known here in Japan for many years!

Otherwise, the GSMA did a good job as usual, tho. the media room was swamped beyond belief, and we were always on the run for meetings with less time than usual for evening mixers. A bit of a surprise to note the original term agreement for hosting in Barcelona, as announced at the end of 2010 congress, was extended with the new so-called Mobile World Capital beginning now in 2013. So, it seems we’ll be back on Fira ‘at least’ one more time next year.