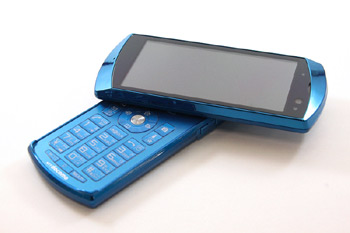 For those who wonder Why Japan Couldn’t Make a Phone Like This.. it would be easy to shred your one-way approach, maybe we’ll get around to that yet. Meanwhile, lets just look forward for now shall we..?!?

A quick review of the new F-06B for DoCoMo by Fujitsu just released to the market here on June 12th. It’s the first example, that we can find, of a waterproof handset that has both slider and twister design, guess that was an engineering challenge. Touting 13MB camera with 4128×3096 .jpg resolution and full touch screen – with scrawling input – on 3.5 inch WVGA TFT display at 16.77 million colors or 480Ã—960 dots.