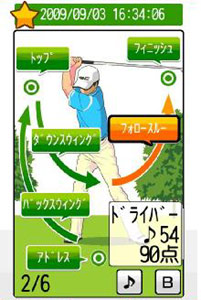 Fujitsu announced [Jpn] that they have developed “3D motion Sen Synge engine” technology that three-dimensionally measured the movement of the body of the person who had it by using the sensor built into a mobile phone. The application program “ETGA swing lesson” as a featured example is able to check the golf swing was developed to demonstrate the potential applications of this service.

The ETGA Swing Lesson analyzes the orbit of the swing form from the body movement data, and diagnoses the swing. It only has to install the cellular phone equipped with the acceleration sensor and the giro sensor in the small of the back, and it is possible to compare it with a past best swing of the self besides the evaluation and advice are received. It exhibits at “CEATEC JAPAN 2009″ held in Makuhari Messe on October 6th.

As for “3D motion Sen Synge engine”, the amount of the rotation of the waist within the fixed time when the body moves and the direction of the waist pay attention to a point different in each movement pattern. The movement pattern is analyzed by detecting the characteristic. It developed in cooperation with “Sen Synge control lab” in which professor of Hosei University Jiro Watanabe served as the president.

Moreover, various services that cannot be done in the application program unit can be developed by installing the up-loading function of the swing data. Network service “Golf swing check site (tentative name)” by the collaboration with the golf digest online is scheduled to be offered when putting it on the market though the sale time of the correspondence terminal is undecided.