DoCoMo announced it has developed a mobile phone prototype made with the surplus wood of trees culled during thinning operations to maintain healthy forests. The mock-up was created in collaboration with Sharp, Olympus and th ‘More Trees’ reforestation project founded by musician Ryuichi Sakamoto and others. This would represent a natural addition to previous corn based offerings – circa 2005 – via NEC and Fujitsu. 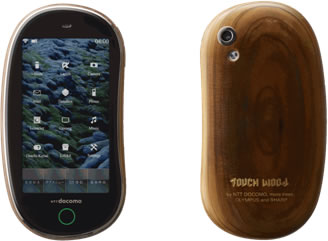 The TOUCH WOOD is made from the surplus wood of trees culled during forest-thinning operations. This new commercial use for thinned wood, which traditionally has only limited applications, helps to preserve other wood resources while strengthening the health of overgrown forests. So far, TOUCH WOOD production has used wood culled from the Shimanto forest in Japan’s Kochi Prefecture. The forest is managed by the more trees project.

The graphical user interface (GUI) is based on the photographic art of Mikiya Takimoto, a more trees advocate. Sample units of the TOUCH WOOD handset will be exhibited at ITU Telecom World 2009 in Geneva, Switzerland from October 5 to 9 and CEATEC JAPAN 2009 at Makuhari Messe, Chiba Prefecture, Japan from October 6 to 10.