The good folks over at YAPPA have launched an interesting platform, in conjunction with Dentsu, for browsing and purchasing magazines. The MagaStore, initially targeting the iPhone but eventually available for other mobile platforms, debuts with 30 titles provided by 20 mainstream publishers including Asahi Shimbun, ALBA, Kodansha, Shogakukan, Shinchosha, SONY, Hankyu and Fuso. 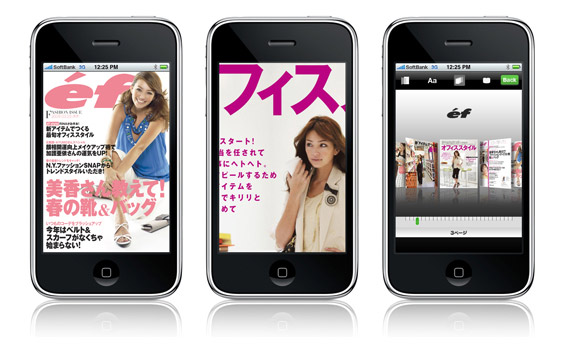 According to the press release (in Japanese) they expect to double the publishers and title list over the next year along with added PC offerings. The application wrapper is priced at approx. $1 usd to download and magazine contents range from free up to $6. The offering also includes access to current and archive editions with a so-called “MyShelf” which allows for customers to store their library of purchases.

It should be noted their platform has enabled the Yomiuri online digital edition and they launched a similar iPhone app for uber-popular Tezuka manga in April. Congrats to Ito-san and company!