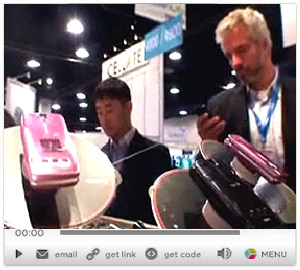 We’re finally back, and fully recovered, from the the annual CTIA Wireless event held last month in Las Vegas. As you might imagine living large on the strip for almost a whole week took a certain degree of – ahem – stamina, but we did manage to spend some valuable time the show floor, had several meetings in the VIP lounge, some interviews in the media room and a few ‘interesting’ connections in Caesars Palace.

While it’s only be fair to expect, considering the current economic times, that YoY attendance would be down as was the case during Mobile World Congress in February. That being said, the trade exhibitors – and delegates in general – seemed plenty up-beat with both Samsung and LG front and center in full force with along with all the usual suspects taking hefty square footage at LVCC. Of course there were a few Japanese players represented with DoCoMo, Fujitsu and Kyocera, who had an entire section of Sanyo handsets, both taking space to demo their products and services.

Several keynotes were certainly worthwhile, notably the performance by Al Gore, and of course we have to say that the Opera mixer at Wet Republic was one of the best after-hour events we’ve attended so far this year! Over-all impressions boil down to the increasing realization of potential for mobile in the Americas and the predictable rush into that space by all players.

Our take-away vastly exceeds the few scenes on this video, which we produced for the upcoming 2nd edition of Mob Rulz, but perhaps one of the most memorable was watching literally dozens of folks all busily texting via their mobiles during a sky-train commute.. Just Like in Tokyo!

previous post: WiMax in Japan Looking Down on 3G |–| next post: NEC and Renesas in Merger Talks