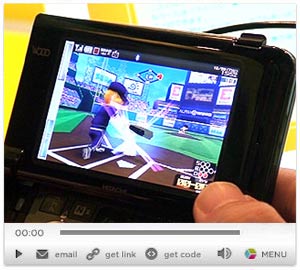 It was yet another exciting TGS event here in Tokyo, running October 9 – 12, and the ‘Ready For Game Time’ theme was splashed around Makuhari Messe with plenty of next-generation mobile games coming out into the public eye. Wireless Watch Japan was on site – as always – to get a sneak peek at the latest, and some soon-to-be greatest, offerings coming out from all the usual domestic software powerhouses.

While we didn’t make it out there for Cosplay Saturday, like last year, we sure noticed a marked improvement in performance on the latest handset models and saw several very cool networked products that would seem sure to please above average casual gamers.

The Chokkan Band product demo – with motion driven guitar, bass and drum options – introduced by Taito in October 2007 was pretty slick in action and they just announced an new opera version with flute, violin and even conductor as well. This Reuters video is very nice.. but we noted one scene around the 1:15 time-mark which clearly shows the violin player with her finger covering the camera sensor.. huh? It’s only available on DoCoMo, for now, with a monthly subscription fee of about $3. We could certainly see this evolving further into a live concert contest platform and our kind host, Hirano-san from the OnAir Business division, seemed to think our suggestion to allow recording jam sessions onto the SD memory card was a good idea..

As mentioned above, the graphics are really blazing on a few titles, check-out the StreetFighter and Baseball examples in our video, they are getting very close to the render speeds on a PSP! While the networked multi-player evolution is clearly gearing up we also thought that Girls Girls offering from BTD Studios, based on great graphics and ‘build-your-super-model’ tamagochi style play, might hit with real potential for future fashion competition action.

Over-all, while there was still plenty of shooting, and as usual lots of pretty girls, this year definitely had several examples of an industry awakening.. we’re looking forward to 2009 already!