Since 1998 the CIAJ has conducted an annual study of mobile phone use in Japan and has released this yearâ€™s survey results. This report strives to capture the most recent user trends and has added topics which might forcast growth demand in the domestic market, including: handset replacement cycle trends after the implementation of the new purchasing plans, ownership of multiple devices and consumer interest in new services and functions, such as video use. The full report is available Here. 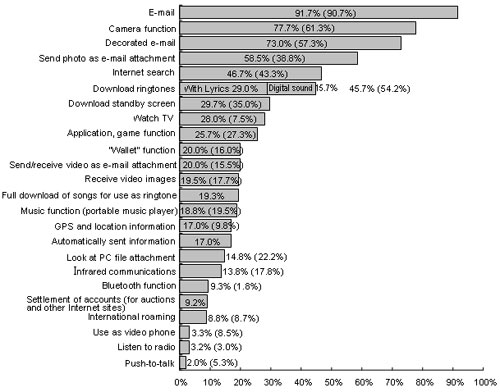 A notable 4x increase, year-on-year, for watching mobile TV, and DecoMail has certainly gone mainstream. Meanwhile, it seems that Push-To-Talk has not gained much traction, despite several years of exposure here. It would be interesting to know if the mobile television segment included 1Seg digital broadcasts – we’re guessing it must – as well as the stated YouTube on-demand contents.