Is Mobile WiMax Ready to Compete 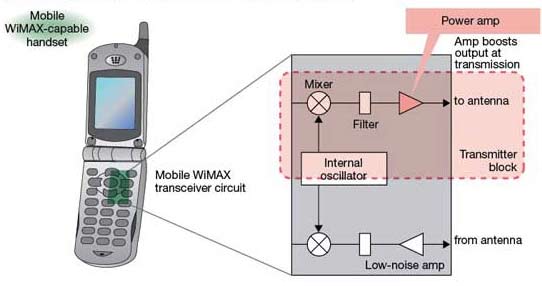 The Nikkei Electronics Asia monthly magazine for June has an interesting article focused on the future potential, and challanges, for mobile WiMax. One of the key areas of consideration is the so-called power added efficiency (PAE) of this new platform, which is deemed a serious concern. There are several major players gearing up for launch with the 802.16e standard, in Japan and elsewhere, so the equipment makers would certainly seem to have their hands full in order to increase performance.

Mobile WiMAX (IEEE802.16e) is the next-generation broadband standard designed to bring high-speed data communications on a par with asynchronous digital subscriber lines (ADSL) and wireless local area networks (LAN) to the mobile environment. In the US, Sprint Nextel Corp of the US has announced commercial service will start between the summer and fall of 2008, while UQ Communications Inc of Japan has already boosted its capital by more than Yen16 billion in preparation for service launch in 2009, and selected the base station equipment manufacturer. Commercial rollout is coming fast.

People in charge of developing terminal equipment for Mobile WiMAX, however, are beginning to get worried about one key device: the power amplifier used in the terminal transmitter.

The general opinion is that the power added efficiency (PAE) of the power amps used in Mobile WiMAX terminals is far too low. Power amps for mobile phones, for example, offer PAEs of 40% to 45% for wideband code division multiple access (W-CDMA), and 50% to 55% for Global System for Mobile Communication (GSM). For Mobile WiMAX, though, the PAE is only 10% to 20%.

The PAE is the ratio between the power input into the power amp, and the signal output power, and is a key performance index for evaluating power amps. A low PAE means that a large fraction of input power is consumed as heat or otherwise wasted. An engineer at one equipment manufacturer explained, “Existing power amps have pretty low efficiency, and therefore consume quite a bit of power. That translates directly to shorter battery drive time for a WiMAX mobile terminal.”