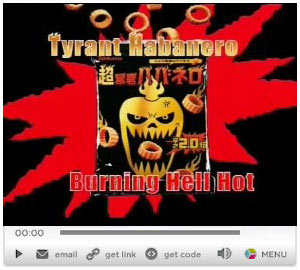 The annual D&AD award winners have been announced with a ‘Yellow Pencil’ going to an interesting campaign by Tokyo-based agency Hakuhodo for snack food client Tohato.

The World’s Worst War used two new spicey snack flavors as opposing forces and engaged players to invite friends, thereby increasing their own personal rank, to join forces of either the Habanero Evil Army or the dreaded Satan Jorquia… Yikes. Better to watch the video!

Then both sides would go online and do battle, in large masses. The game included things such as a 24 hour news service via the mobile phone, so who had died in battle, who had been promoted, which battlefield had been captured by which side, etc.