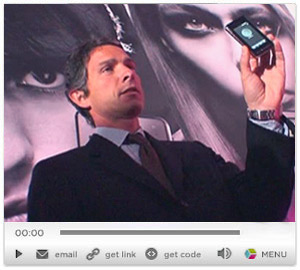 The PRADA Phone by LG will be available in DoCoMo shops, under the model number L852i, according to this official press release [.pdf]. The companies held a splashy launch event, with senior management in attendence, for assorted VIP guests and the media at the Ã¼ber modern Prada building in downtown Tokyo and Wireless Watch Japan was there of course!

The PRADA Phone by LG (L852i) introduces the worldâ€™s first advanced touch interface which eliminates the conventional keypad making the overall usage experience a highly tactile one. An extra wide LCD screen maximizes visual impact, allowing the user to benefit from several key features of the phone. Above all, these features contribute to the phoneâ€™s beautifully sleek and simplistic appearance.

Glowing icons on the face of the phone disappear when not in use to reveal a pure, un-adulterated black exterior. The phone is ultra thin (just 12.7 mm), nonetheless it hosts an array of additional multimedia functions, including i-motion video playback. It also boasts an external memory slot, allowing the user to increase memory capacity for images, music and film clips.

The glamour queens are racing down Omote Sando dori as we type this post..