KDDI and Kyocera announced they are recalling 214,349 batteries used in the W42K model made by Kyocera handsets because they may overheat. The companies note they were aware of 13 cases reported where batteries overheated causing burn injuries burns to three people. According to the press release battery production was contracted to NEC Tokin Corp., 51 percent owned by NEC Corp., and made in China. Kyocera said it will suspend use of NEC Tokin’s products.

KDDI and Kyocera first became aware of the problem on March 14, and two of the incidents happened after that, said Masahiro Inoue, associate senior vice president of KDDI. Kyoto, western Japan-based Kyocera uses two types of battery packs for the affected handset, one of which may cause overheating. The company will mail the other type of battery pack to W42K users as a replacement.

The replacement adds to a recall of 200,000 NEC Tokin batteries last June by KDDI and Willcom Inc. because of the danger of overheating that prompted the battery-maker’s stock to fall to its lowest in two years. Kyocera and NEC Tokin are in discussion to determine where responsibility for the problem lies, Chikako Morioka, a spokeswoman for Kyocera, said by phone. 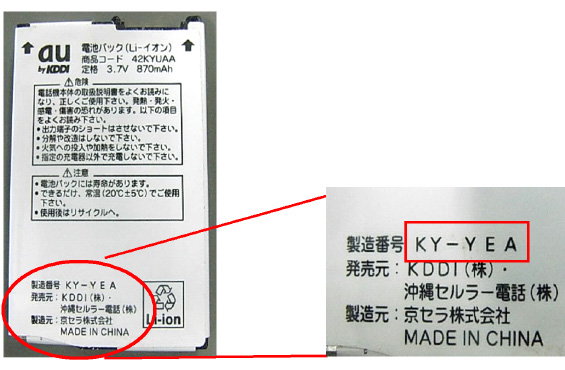 previous post: The Father of i-mode to Leave DoCoMo |–| next post: Kyocera Makes a Splash in Vegas