Impressions from the MoMo Global Summit 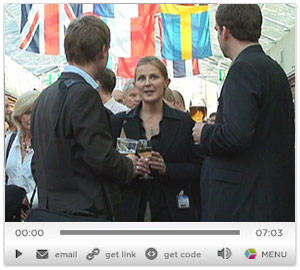 The 3rd annual MobileMonday Global Summit was held in Helsinki, Finland, on 10 September with an estimated 1,500 attendees; this year included a bonus side-trip to St. Petersburg, Russia, the following evening. WWJ was there once again, as founders of the MoMo Tokyo chapter, along with representatives from over 20 MoMo cities around the world. In addition to our Trip Report, WWJ’s ed-in-chief Daniel Scuka offers these thoughts about the experience.

The event panels included a nice cross-section of ‘insidery’ mobile folks. One of the best was definitely the Executive Panel, including Gartner’s Lars Persson, KDDI’s Hitomi Murakami, CEO Veli-Matti Mattila, from Finnish No. 2 carrier Elisa, Senior VP Ville Mujunen, from Sulake Dynamoid, and Director Mark Ollila, from Nokia. It was nice to see Murakami-sensei asking questions back to the audience (“Most Japanese think our next-generation mobile business will be based on mobile TV. What do you think?”), to elicit a little interactive feedback, and the Nokia guy was pleasantly down-to-earth (they aren’t always) and humble, mentioning that he sees one of the big challenges in answering, “How do we obtain and access content via mobile?” Maybe we’ll finally see Japan’s track-proven QR code application get more serious consideration in at least some of Nokia’s markets (note this upcoming event by MoMo in Barcelona!).

It’s as if the Japanese car makers back in the 80′s had gone ahead and developed their kick-ass, world-beating technology and production methods, but the only place you could buy their cars was in Japan itself. That’s how weird it is and that’s how far behind the rest of the mobile world seems to be falling.

We watched the keynote presentation from the local Gartner guy, Managing Partner Lars Persson, who spoke well and definitely presented ‘some’ useful facts and information gleaned from global mobile markets. But his analysis and trend forecasts were, at best, weak. Several of the people we spoke with afterwards were surprised by the generic level of material he choose to present in front of such an astute audience.

One slide that completely under-impressed us included a forecast that WiMax would die off. In our opinion, the technology is just too simple, too useful and too cheap (on a cost-per-bandwidth basis) to go away. His negative opinion on the future potential of WiMax seemed odd considering the activity developing around that space, especially for emerging markets and even in Japan considering the latest efforts by major players to get a 2.5-Ghz license.

One of the better panels was focused on Mobile Entertainment, including (Ahem!) our very own Mobikyo Representative Director Lars Cosh-Ishii together with Nidal Barake from MoMo Caracas, Sarah Miller, MoMo L.A. and active with iHollywood, Andy Zain from MoMo Jakarta, and Gianmauro Calafiore, from MoMo Italy. Some of the discussion points included:

- the impact of mobile technology on the entertainment economy today

- challenges faced by the industry, now and in the future, for delivering mobile content

- how carriers change the way mobile brands interact with consumers

One of the interesting comments, from Nidal, was related to how expensive ring-tones are via the carriers’ decks in Venezuela and that street vendors commonly offer side-loading for the same content at 10 percent the cost of retail downloads as the predictable work-around.

Simon Bureau, from Vectis in Seoul, Korea, also provided some interesting comments during our video interview on Korean carriers’ mobile music subscription models, in which you can access your on-board music library and – obviously – download new tunes so long as you keep paying the monthly fee.

But once you end your subscription, the on-board DRM kicks in and you can no longer play anything – now that’s a way to build customer loyalty (with which we’re not sure we agree!). DoCoMo are trying the same strategy with Napster in Japan – time will tell. Simon also mentioned the importance in Korea of ‘side-loading content’ – music you transfer to the phone via memory stick. That’s also been a big item in Japan since the Carrier formerly known as Vodafone introduced it several years back; in the Vodafone Live BB service, users download the contents via a fixed-line PC, then transfer the DRM’d files over to the phone and receive the unlock key via subscription payment over the air.

Despite the potentially over-restrictive DRM issues, we wonder whether the US and EU will actually learn a thing or two from these more mature Asian mobile players? It will be interesting to see what the landscape looks like at the next Global Summit in 2008.