According to Infinita, Media Groove Inc. will beta launch a new mobile SNS service on September 15. Chipuya Town is a Flash-based 2D version of real-world Tokyo youth hotspot Shibuya that users will be able to navigate around and interact in with avatars. The offering also features a virtual currency system which can be redeemed for avatar clothing as well as interior goods for avatar rooms, and according to the press release for mobile content such as full track music downloads, too. 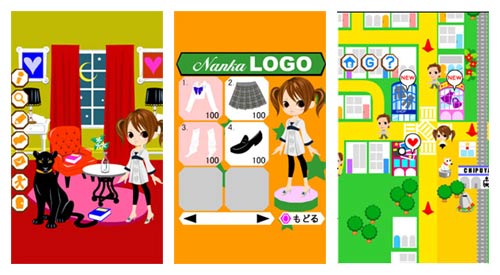 While Chipuya Town doesnâ€™t feature mobile games (as opposed to mobagetown), it does seem to have a more advanced virtual economy, and to be taking a cross-platform approach: In an Second Life-inspired take, users can use a free PC-based Flash application to actually create avatar items such as clothes and avatar home accessories themselves, that they can then use for own their own avatars or sell to others in virtual Shibuya – the mobile version, that is.

Media Groove is also planning on selling virtual store branches to real-world companies feeling a need for a presence within Chipuya. Recruiting customers will start August 1. Customers will be given several tools to pitch their goods to the avatar masses, including advertising outside and inside their virtual stores, in-store promotional events and â€“ this sort of boggles my mind â€“ a virtual advertising truck that will drive around and hand out virtual leaflets to avatars. Starting at JPY 1,000,000 per month (USD 8,000), rent is quite steep in absolute terms, but may pay off if Chipuya Town sees growth rates similar to mobagetown.

We’re scrambling to get our slick new WWJ storefront ready for those masses..