Seron over at What Japan Thinks translated a recently-published report from infoPLANT looking at access trends of blogs and SNS from both mobile phones and PC’s. Conducted between the 15th and 22nd of May 2007 3,709 people self-selected themselves to complete a public survey offered through the NTT DoCoMo iMode menuing system. 61.9% of the sample was female. 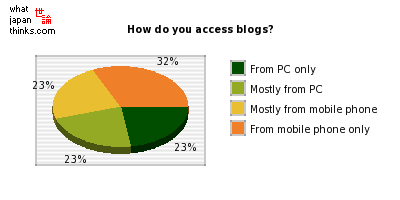 Some of the interesting comments – Full Details Here – noted:

– The trends for males was strange; only a third of teenage boys visited SNSs, but a majority of both those in their twenties and in their fifties did. For women, there was a much simpler trend, the younger the more frequently they visited.

– The percentage having a blog was quite constant for all male age groups, but there was a very noticable trend for females; over half of teenage girls had one, whilst less than a tenth of over fifty women kept one.

By Ken Yasumoto-Nicolson from What Japan Thinks