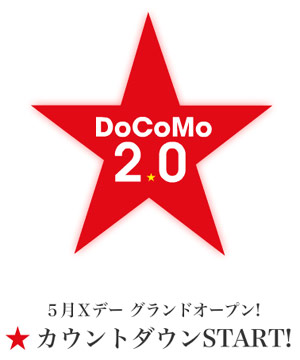 WWJ pointed to this webcast of their presentation, which clearly stated from the very beginning the new “DoCoMo 2.0” campaign theme.

We shouldnâ€™t really be surprised that the main message, from Japanâ€™s dominant mobile operator, contained in the announcement somehow managed to get 2.0 attention from the mainstream media. With few exceptions, the entire tech web focused on the motion-sensor for gaming application. Few if any noted how ironic it was that while the company insisted it was going to â€œfocus on offering unique applications and services that will be difficult for the competition to duplicateâ€ they were in fact introducing a functionality which was originally made available in Japan [video here] by Vodafone and Sharp over two years ago.

Perhaps the gritty details — such as the fact that all five new models will (of course) ship pre-installed with the Osaifu-Keitai FeliCa mobile wallet together with related security services — are less appealing to the overseas media than Nokiaâ€™s recent announcement that they, too, have the mobile wallet urge?

To be sure, there were a few interesting new offerings in Natsuno-san’s presentation, such as the 2-in-1 dual-identity option and flat-rate access to Napster’s full music library service. However, one of the main observations we take away from this news is that the rest of the world still tends to focus only on the most quirky headlines (wait until the MSM find out about this one). WWJ subscribers login for our thoughts on this latest development.

As you might imagine, there is much more discussion about Big D’s 2.0 campaign message coming from the domestic media, basically centering on whether it’s simply a marketing stunt or if this indeed signals a quantum shift in Japan’s mature mobile ecosystem.

It certainly seems like a little bit of both; at first look it appears that the locals – for the most part – are rather un-impressed.

The company only introduced five models for their flagship high-end FOMA brand, which is definitely unusual and perhaps a sign that the roll-out was somewhat rushed. In fact, with the huge number of new handsets released over the last six months, these meagre five may indicate that the device makers are being pushed to their limit by carrier-driven (and ever-tightening) handset replacement cycles. So it is fair to suggest that DoCoMo are feeling the heat since mobile number portability kicked in and felt the need to hit back with a fresh-sounding agenda.

Parsing the details, we note that every model has Windows Media Player (WMA) audio capability and that all five have GPS â€” a first for DoCoMo â€” as now mandated by law. However, there is only a single model offering the 1-Seg digital TV tuner (F904i) and just one other that is HSDPA (3.5G)-enabled (N904i) – definitely slim pickings compared to their 903i-series.

The maximum application download size has been increased from 500KB to 2MB and the embedded motion-sensor could lead to some interesting applications, beyond groovy games, for 3rd party developers (maps for example) if this becomes a common feature in DoCoMo handsets in the future (full model specs – in English – here .pdf).

Another interesting data point was released under the “Reinforcement of existing services” section. The company indicated their core m-commerce DCMX product, which launched in April 2006, now has “approximately 150,000 iD reader/writers (as of March 31, 2007) currently active and another 350,000 are scheduled to be introduced. There are more than 2.25 million DCMX subscribers (as of April 18, 2007).” This indicates the mobile DCMX credit-card service has gained on average over 200,000 new subscribers per month since the last official tally was revealed in November 2006. This means that a hefty chunk of their new customers are adopting the service.

To summarize: we’d like to point out that DoCoMo have always been a pioneer in the mobile space – a US$75 bn market here – and that they will no doubt continue to push the envelope. As WWJ recently noted here, certain industry insiders believe Japan is already well into V2.0 of the wireless revolution and we would not be at all surprised to see DoCoMo make a follow-up announcement with several more 904 handset models very soon.