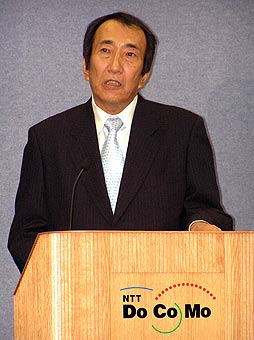 Despite the resounding silence from DoCoMo’s website, Tower Records (part-owned by DoCoMo) have just introduced a joint-venture service with Napster in Japan. The Tower Records Japan-Napster JV will provide music distribution services for PC and mobile from an initial catalogue of 1.5 million songs. The initial service launch only allows content purchased by premium subscribers – a subscription costs 1,980 JPY per month – to be moved from the PC to mobile devices – and at this time only one handset (F902is) is supported.

DoCoMo took a 42 percent share of Tower Records here in November 2005 and – if the on-scene hype at DoCoMo’s booth at this week’s CEATEC consumer electronics show is any guide – they appear ready to announce a more aggressive mobile music device line-up in the coming weeks.

The Tower Records initiative appears not unrelated to DoCoMo’s overall mobile music strategy, which has so far run a distant second to mobile market leader KDDI/au.

DoCoMo’s late move to launch Chuku Uta Full was possibly in part due to fears of traffic congestion.

At last week’s DoCoMo presser just prior to CEATEC in Makuhari Messe, CEO Nakamura took time to explain the ongoing and upcoming base station and 3G FOMA network coverage plans, emphasizing that the carrier would boost coverage at “JR stations, universities, junior colleges and high schools.”

And he pointedly did not mention the Tower-Napster JV, despite the DoCoMo booth folks passing out all kinds of promotional goodies, including coupons for free downloads, just a couple days later at CEATEC.

FOMA coverage in dense areas has often been mentioned by Japanese media as being weak; DoCoMo have recently run newspaper advertisements asking FOMA-using mobilers to let them know where their phones won’t work. So far, DoCoMo have installed new 3G base stations in about 60 percent of the reported shadow areas, according to Nakamura.

Since 2005, DoCoMo have launched two music services that avoid using the 3G network for downloading the music files themselves, although navigation, search and payment are done via i-mode. Their ‘Music Porter’ devices allow users to receive and record music broadcast via the MobaHO! satellite multimedia broadcaster via flat-rate billing (and, obviously, no packet fees). There are 15 music channels subscribers are limited only by memory space on individual devices (1 GB on the Music Porter X).

The F902iS can play music downloaded to a PC from more than 100 online music services, and also supports music ripped from CDs.

The second service runs via the F902iS, launched this summer, which supports both Windows Media Audio and Windows Media Digital Rights Management 10 for Portable Devices (WMDRM-PD). The F902iS can play music downloaded to a PC from more than 100 online music services, and also supports music ripped from CDs.

There is also a ‘Music Channel’ service, a push-content system that does use the 3G network to deliver large audio files to handsets. Files are delivered overnight, when network usage is low. Music Channel uses the new HSDPA 3.5G service, which started on 31 August, and offers approximately 10x faster download speeds, according to Nakamura. HSDPA is for now only available within the Tokyo metro area, but should expand to major cities nationwide by the start of mobile number portability (MNP) at the end of October.

But now that MNP hangs over Big D – the carrier believed to have the most to lose – music and other sticky services are suddenly hugely important.

According to the 3 October press release from Tower Records, the JV between Tower and Napster will offer unlimited access to over 1.5 million songs starting at 1,280 yen per month; the service opened at 22:00 JST.

The subscription-based service – the first of its kind in Japan according to Tower – comes in two varieties: Napster Basic, which provides unlimited downloads to up to three computers for 1,280 yen per month, and Napster To Go, which expands on the basic service to include downloads to the same number of portable music players or mobile phones for 1,980 per month.

Also available is Napster a la carte, a pay-as-you-download service through which users can purchase individual songs or albums and burn purchased music to CD.

Content consumers tend to be wiling to pay a little more for a higher flat-rate ‘floor’ price in comparison to per-unit billing, where they tend to self-limit and self-regulate consumption.

Napster said their research has shown that subscribers to unlimited access services purchase more music than consumers who buy songs or albums individually. This reflects what mobile operators in Japan have found with the advent of flat-rate data on 3G and the widespread use of subscription billing for content; content consumers tend to be wiling to pay a little more for a higher flat-rate ‘floor’ price in comparison to per-unit billing, where they tend to self-limit and self-regulate consumption.

Chaku Uta Full music content on KDDI is largely controlled by Label Mobile, a joint venture between the major labels who do not always make their full library or all the most popular artists available for direct-to-mobile download.

Tower Records said that, when asked how Mac users might take advantage of the new service, which is not compatible with the popular brand of computers and iPod music players, Paul Greenberg, co-COO of Napster Japan said, “Well, they could switch.”

However, with Apple’s plan to transition all of its Macs to using Intel microprocessors by the end of 2007, which is expected to allow them to run both Mac and Windows applications, users should also be able to take advantage of Napster’s service.

Although its library of Japanese music is still quite limited, Napster Japan plans to expand on existing ties with over 270 record companies including Sony Music Network, Toshiba EMI, Victor Entertainment, BMG Japan and Warner Music Japan to add one million songs over the next six months. Going forward, Napster Japan aims to register one million subscribers in three years.

The overall result of Napster’s launch with Tower should be that a growing fleet of DoCoMo handsets will be able to play back music ripped from tracks purchased online (and, potentially, paid for via mobile as well) and delivered via PC download. This service joins the existing large number of PC Web music delivery services avialble to DoCoMO handsets, thus locking in DoCoMo users at a time when still-weak 3G coverage, still-new 3.5G coverage and MNP are all urging subscribers to flea to the competition.

It’s ironic that NTT DoCoMo, the champion of i-mode first popularized using open Internet standards, appears set to catch up to the mobile music competition by virtue of Microsoft’s proprietary music playback and DRM technology. However, they are doing so precisely because Microsoft is motivated to make their music player and DRM as widely available as possible (we can’t quite say ‘open source yet’).

In contrast, KDDI/au may face a shrinking mobile music future if the Japanese labels continue to limit the portion of their libraries made available for direct-to-mobile distribution, a feature of older, closed and vertically isolated business models.