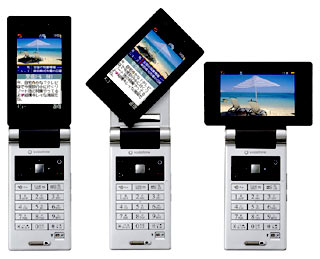 The historic SoftBank / Vodafone press conference, held 18 May at Tokyo’s swanky Conrad Hilton, generated a flood of information and even more questions. Not much seems certain after Softbank’s Masayoshi Son and Vodafone’s Arun Sarin dropped the announcement of a never-before-tried plan for UK carrier Vodafone PLC to cooperate with Japanese Internet services company Softbank in a 50-50 joint venture aimed at developing mobile phones, services and content (mostly for Japan). On one level, the move is a straightforward play to enable Vodafone to keep at least some connection to Japan’s cutting-edge market and extract expertise, content, devices and business models (everything the old Vodafone KK was supposed to do). But looking deeper, the devil is readily apparent in the details: Who pays for what? To whom does value flow? Will VF be willing to implement strategy and devices from Japan via Son that they weren’t via their own wholly owned subsidiary? And what’s in it for Softbank — What could they possibly need from The Rest of the World?

As the humidity settles in for another long, torrid Tokyo summer, a ‘wait-and-see’ response is the most generous recommendation WWJ can make; however we can point to one bright spot: the new flagship handset, the 905SH. Available on 27 May, the phone is probably the best piece of mobile gear available on the Tokyo street this season. But will it be enough to stem the inevitable tide of subscribers from the company formerly known as Vodafone to Softbank competitors? Probably not. (Subscribers log in for more commentary on the rebranding, the new VF-Softbank joint venture and other Japan mobile highlights.)

Leaving our opinion on the international tie-up until below, let’s concentrate for a moment on the decision to re-brand Vodafone KK as SoftBank Mobile.

Many believed the option to switch back to the former (and popular) ‘J-Phone’ brand would have had an immediate positive loyalty and retention impact on current customers and help pull in new ones — not to mention the morale boost for employees, vendors, distributors and VF live! content ecosystem providers.

We could have imagined Son rebuilding the old name through a massive street-level ad campaign, in SoftBank-savvy, ‘Yahoo! BB’ style, with mini-skirt marketing drones outside train stations handing out welcome packs and little adhesive J-Phone stickers for customers to paste over the Vodafone logo on their current handset as one perfectly cheeky example of Son’s street-smarts.

Since we’ll never know what, if any, difference this alternate branding path would have made, we’ll just have to accept that the $15 bn purchase gives Son-san every right to choose what name and logo will be stamped on his customers’ handsets. That being said, the company has done very well so far riding on the Yahoo! gravy train and, we note, they did not try to run Yahoo! offerings (search, auctions, etc. ) as ‘SoftBank Search’ or ‘SoftBank Auctions’.

In a market that’s well-known to be hyper-conscious about brand, it would be interesting to hear one day why they made the SoftBank Mobile decision; it appears to mark a golden opportunity missed and may prove to be a great loss-of-brand-value case study for some B-school somewhere.

Between last week’s two major announcements, renaming the company and the new 50-50, $100M joint venture, it’s difficult to say which one smells worse.

The newly minted SoftBank Mobile group has a very narrow window of time in which to defend the (shaky) former Vodafone position in the domestic market. As the local incumbent 3G carriers also announced last week, 1 November (a mere five months hence) will mark the long-awaited start date for number portability. And don’t forget: both eAccess and IP Mobile are also gearing up to roll highly competitive flat-rate voice and data services by then (or shortly thereafter).

At first glance, the JV appears to make perfect sense in that Vodafone would like (to have its cake and eat it too) the opportunity to benefit from maintaining some type of relationship to the Japanese market while SoftBank would like to claim a distribution, sales and business development network into Europe for delivering content and technology (i.e. help device suppliers access the outside world) and gain economies of scale on hardware purchases.

Sure, over the past four years, while Vodafone’s Japan arm was under the same Big Red umbrella, a few products did make the transition out of Japan with some success: J-Phone’s ‘J-Sky’ mobile Internet platform (a virtual clone of i-mode) provided a working example for the eventual VF live! platform in Europe; Sharp managed to move several high-end handset models into Europe; and, a few content providers signed-on overseas (despite an awful revenue share in comparison to back home). All in all, these add up to a mere handful of success stories that may well have happened regardless of Vodafone’s direct in-house connection.

With even less economic incentive under the new JV, similar successes are unlikely to happen (or will of their own accord).

The idea that these two, now-separate companies (with distracted concerns over their own road maps) will “[work] together to develop and purchase handsets, create software as well as make and distribute mobile content” sounds at best optimistic. It’s window dressing for their respective shareholders and, as mentioned at the beginning of this article, a ‘wait-and-see’ approach is the best we can recommend.

Make no mistake: we were and are bullish on SoftBank’s entry into Japan’s mobile market. The potential to cross-sell mobile services to their fixed-line broadband customer base combined with the well-established Yahoo! content and service offerings give Son significant strength and it will be some time before DoCoMo or KDDI can meet him toe-to-toe.

It could be that, in the long haul, the company name change and apparent sympathy co-op deal with a defeated UK giant won’t make much difference. When the TCA numbers start coming in over the next six months, we’ll see how well the subscribers react (or not) and that’s all that really matters. There is likely to be a honeymoon period starting now and that will give SoftBank some breathing room to put their hanko (stamp) all over the former Vodafone.

But, based on their defining first moves, WWJ advises a more skeptical view: Masayoshi Son & company could be in for a tough ride. Son-san: Why are you still fumbling around in the dark with the boys from Newbury? Let the past be and get focused on the hypercompetition that is about to hit right between the eyes.