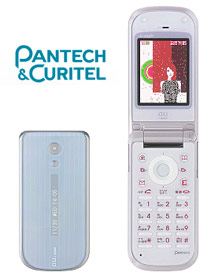 KDDI/au has announced the roll-out of their A1405PT, made by Pantech & Curitel, will begin today in the Hokkaido region and throughout all areas of Japan over the weekend. The phone was jointly developed with KDDI and marks the first entry of a Korean maker’s handset into the Japanese market. Touted, at 98 grams, as the ‘lightest 3G handset’ available in the market, it comes with a limited set of features (only a VGA camera, for example), but it does have an organic EL “Stream Screen” sub-display and has a built-in crime prevention buzzer function, a feature which was also just introduced by DoCoMo (for good reason).

WWJ has been tracking rumours and hints on the entry of Korean terminals for some time now but this is hard fact on the ground. We have seen Sanyo and Casio pushing into the U.S. market along with Sharp and NEC making moves in Europe. It’s clearly becoming a two-way street with the recent launch of Motorola’s M-1000 with DoCoMo, who have also indicated that LG and Nokia models are in the pipeline.

Note that during a November 2004 press conference held in Tokyo, Vodafone’s Dr. Brian Clark was asked why Samsung models, which were approved by Vodafone Global for the Group’s then-new 3G line-up, would not be offered in Japan. He said something to the effect of “the decision was taken by Vodafone K.K.” and that “they felt that it was not the right product for this market at this time” (the full Q&A session is available as an MP3 here).

In hindsight, the Samsung Z500 could not have done any worse than the foreign-made models they did chose.

With global market borders for handset hardware blurring over the past few years, we expect to see more units coming into Japan from overseas in the near future. The unavoidable ‘economy of scale’ requirements are forcing carriers here — like those elsewhere — to procure low-cost handsets. Based on the results so far, it should be very interesting to see how much uptake they get from the predictably finicky Japanese customer.

Somehow, it would seem that this move might prove to be more successful.