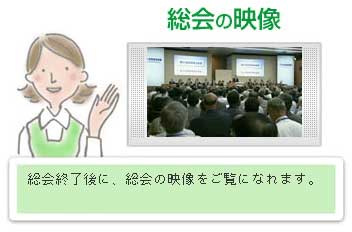 What is the sound of one hand tapping? If you are a shareholder in NTT DoCoMo it could be a pretty loud sound indeed reverberating right into the executive boardroom. Shareholders at NTT DoCoMo’s Tuesday, 21 June, shareholders meeting will be able to vote by cell phone through a secure site tapping in ‘yea’ and ‘nay’ at their convenience without trudging all the way down to the New Otani Hotel in Akasaka.Â

NTT is one of a growing number of Japanese corporations mainstreaming cell phones into shareholder operations. Panasonic, video game maker Taito Corp., [.pdf] and Sony [.pdf] are each allowing M-votes at shareholder meetings this year. Voters receive an access code and password in their voter’s invitation/agenda (generally sent out a couple of weeks in advance). For the Panasonic meeting on 29 June, m-voters connect quickly to the secure site by scanning a QR code (scroll down) which kick starts the password process. DoCoMo shareholders also streamline through with a QR code. Both secure mobile and Internet voting sites may be handled by banks such as UFJ for Sony’s meeting or Chuo Mitsui Trust and Banking at Panasonic’s.

Internet voting is no longer a novelty at shareholder meetings and 2005 has seen M-votes over cell phones move in that direction as well. Without citing sources, the Nihon Keizai Shimbun stated around 120 firms planned to allow mobile votes for shareholders meetings this year up from just ten last year. Much of this is due to the growing use of 3G phones with secure SSL connections. Many companies in fact limit mobile voting only to handsets equipped with SSL, cautioning shareholders to check if their phone is on the list of accepted handsets.

Generally voters can access from any of the major telecom operators: au KDDI, DoCoMo, Vodafone. One exception, DoCoMo?fs announcement listed no other providers for M-vote access. As you?fd expect, if you?fre an NTT shareholder you had better have a DoCoMo cell phone in your hand.

Corporate governance and shareholders rights have undergone a slow transformation in this country. Not long ago Sokaiya racketeers allegedly commonly blackmailed corporations into huge payments to keep shareholder meetings under strict control. Payments were said to stop embarrassing or damaging topics from gaining the floor either by shareholders or Sokaiya thugs themselves. The late 90s finally saw some of these scandals come to light with heavy fines imposed on a number of corporations.

Information disclosure by Japanese businesses is still a long way from what Western shareholders would expect but incremental changes have crept in. Voting via cell phones and over the Internet enables Japanese companies to lower some of the traditional barriers to shareholders and increase participation in corporate governance. A mobile handset is all shareholders may need to start making their voices heard.