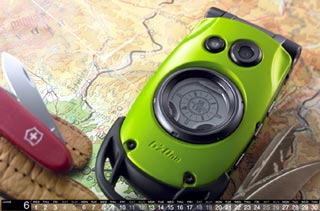 Casio’s rugged water-and-shock resistant mobile handsets from KDDI launched at a press event held in the celco’s shiny Harajuku Designing Studio first-floor theater; both features are firsts for a 3G handset and the G’zOne [flash site here] certainly looks like it should be hanging from a REI backpack while its user hammers pylons into a sheer rock face. An optional handle-cum-customized protector curves around the handset’s top edge, just begging for a carabiner clip. The phone has two screens, a 2.2-inch QVGA on the inside and 1-inch circular screen centered in the front cover.

All three models, the C303C, C311CA and C409CA, are covered in a tough polyurethane material with a magnesium alloy body to absorb hard knocks. G’zOne’s front screen functions as an electronic compass orienting with the built-in GPS tracking system and linked to KDDI’s signature EZ Navi walk navigation system, all ready for urban trailblazing. Even if your most arduous climb is the subway steps at Harajuku’s Omote Sando station, that water-resistant function could come in very handy when typhoon season hits. KDDI says the handset can withstand 30 minutes in water at a depth of one meter (although they admit tap water was used in the testing rather than chilly spring snow run-off). Our pictures from launch day are inside… 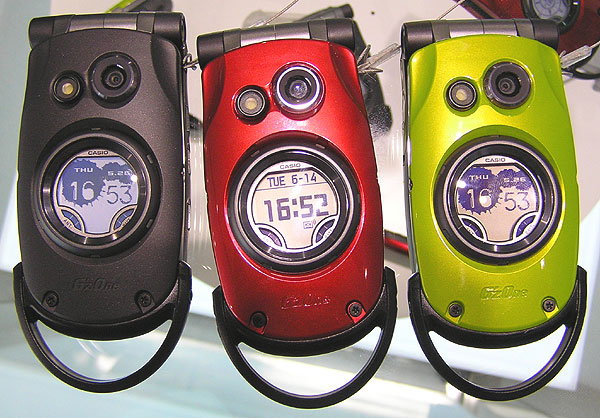 For such a camera-centric mobile phone company, KDDI has strangely opted for only 1.28 megapixels on this model. After all if you’re trekking the great outdoors you want to bring back stunning photographic evidence plus combining a camera and phone in one package reduces weight for backpackers. Casio, however, may be afraid of cannibalizing sales from its own digital camera lines and opted/refused to pump up the pixels. At least file size for email attachments has been expanded to 500KB. 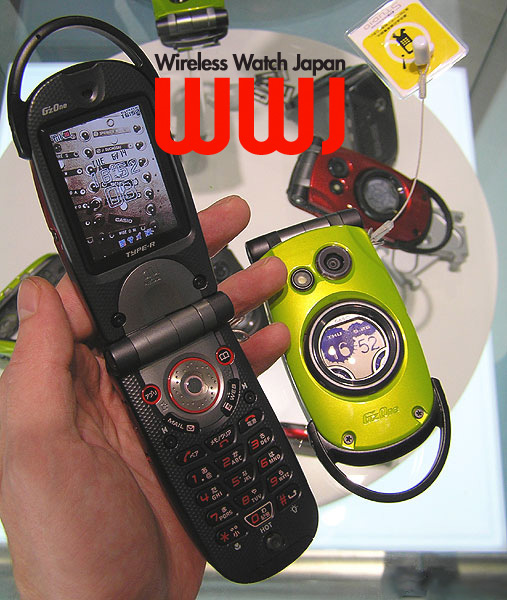 With rough tough KDDI/Casio G-Zone handsets, backpackers, fishing enthusiasts, kayakers and climbers can chat their way though the wildernessâ€“ provided there are enough way stations to transmit signal â€“proving that in Japan there really is no escape from ambient phone chatter. This could be a design winner should it land on US shores in time for the Christmas shopping rush. Casio enjoyed huge international success with its G-Shock series of wristwatches, moving the G-brand onto mobile makes sense.