As if Japanese phones weren’t mobese enough, KDDI is first out of the gate with music distribution for cell phones — allowing multi-slackers to download artists’ songs in their entirety right to the handset. Launching this month, users of EZ Chaku Uta Full (Chaku – download, uta – song, full – in its entirety, get it?) will have access to 10,000 songs from six web sites covering everything from pop princess Hilary Duff to indie artists. Playlist and music sites are set to expand over the coming year. The company also plans to enable downloads through their ‘NOW On Air’ FM radio subscription service, though a start date has not yet been set. Content fee per song should average around 315 yen and transmission speed will hit a maximum of 2.4 Mbps under KDDI’s ‘Double Flat’ fixed packet charge service.

Download sites on the Internet are rolling out as well, albeit slowly, with Mora, Sony’s BitMusic, and iTunes all in various stages of development. But Chaku-uta Full is the first fully mobile music download service here.

Downloaded music can be replayed on the mobile phone’s speakers or hooked up to external speakers or headphones. Reproduction on the downloads is good, but not true CD quality. High-efficiency AAC+ encoding enables the service to achieve about 80 percent of the original quality. The handsets themselves hold around 10-20 songs on the internal memory, but of course users will offload their collection onto the removable SD Cards to keep the hits coming. Battery life gives the four new cells approximately nine hours of play with earphones or five hours using speakers when used exclusively as media players.

KDDI was the first cellco to step beyond 2G ring tones’ simple melody reproduction to allow short downloads of the real thing via their original EZ Chaku-uta service, now hyperpopular. To date, EZ Chaku-uta has rung up more than 120 million downloads.

Ringtone company revenues, which have remained strong despite similar Chaku-uta services from the other carriers, will certainly feel the pinch as handset owners gain more choices to access mobile music media in 2005. Something that has helped the ringtone companies along is Japanese law, which — unlike in Korea where similar 3G CDMA 1X networks are the norm — permits automatic rollover of monthly subscriptions. Unless cancelled directly by the user, billing is automaticly continued month after month.

Huge numbers of handset owners have their phones cluttered with subscriptions they have forgotten all about but for which they continue to pay — until they change handsets. At that time, the shop gives them a list of their current subscriptions and the option to discontinue; it should come as no surprise if handset turnover from 2 to 3G sees many users dropping out of older ringtone services and opting in to music downloads. 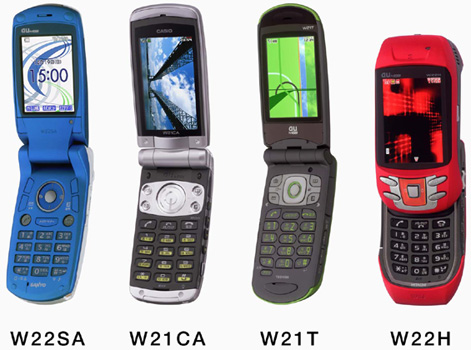 The Handsets: Casio Computer’s W21CA; W21T from Toshiba; the Sanyo W22SA; and W22H out of Hitachi will be released sequentially in late November.

Besides stereo sound, several models are equipped with a PC Site Viewer for access to online websites.

The W21CA has a 2.6-inch-wide QVGA screen for better viewing of 3D games, a 2-megapixel camera, PC Site Viewer, and is Flash-equipped for customizing icons and graphics (but no FM tuner). It also comes with a custom cradle for transformation into a desktop media player.

Toshiba’s W21T is equipped with Bluetooth for hands-free use, no PC viewer, a 2.4-inch QVGA screen, bar-code reader, and a connector to play 3D games on a TV.

Hitachi’s W22H is perhaps the most interesting design of all four, with its slide-back cover and big, 2.4-inch screen. In bright red, it looks a lot like a scaled-down Ferrari; but with no PC reader and no FM tuner, it cedes first place in the features race.