With KDDI’s May 2004 announcement that they had developed handsets with embedded digital TV tuners and ample battery life, and with NHK, Mobile Broadcasting Corp., and others promising direct-to-mobile broadcasts, TV is again being widely touted as the “next big thing” for the mobile platform — and not just in Japan. But before we truly see an era of television-keitai convergence, several critical issues must be understood and addressed. Many of these are fundamental flaws in the concept of mobile phone-TV convergence, and suggest that we are simply witnessing the introduction of the “next big hype” for the mobile platform.

Editor’s note: Philip Sugai is assistant professor of marketing at the International University of Japan (IUJ), Niigata, Japan. He teaches Internet marketing, mobile marketing, new product development, and brand management. Philip’s primary research interests are mobile and wireless consumer behavior and new product development in new media. He has published a number of articles and white papers related to the marketing implications of these emerging technologies in leading national and regional publications in the US and Japan.

As MP3 download and playback capabilities using a mobile handset became a reality this year in Japan, the next media channel to gain extraordinary levels of attention has been television. With the announcement and subsequent launch of NEC’s 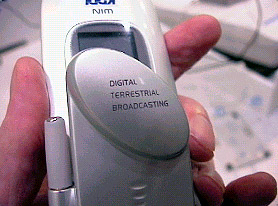 See WWJ’s Video Program), and with NHK (Japan’s popular public broadcast network), Mobile Broadcasting Corp. (a Toshiba-led joint venture), and others promising direct-to-mobile broadcasts, TV is yet again being widely touted as the “next big thing” for the mobile platform — and not just in Japan.

But before we truly see an era of television-keitai convergence, several critical issues must be understood and addressed. In my opinion, many of these are fundamental flaws in the concept of mobile phone-TV convergence, and suggest that we are simply witnessing the introduction of the “next big hype” for the mobile platform.

First, one of the major yet often-overlooked elements behind the development and sale of next-generation handsets (think 3G) are hefty subsidies paid by the mobile operators in Japan and elsewhere to handset manufacturers to support terminal R&D efforts. But both analog and digital TV tuners allow keitai users to go “off network,” bypassing the DoCoMos, Vodafones, and KDDIs of the world, and going straight to the source of the content.

On the other hand, sending TV programming over the carrier’s data network infrastructure, as MobiTV (www.mobitv.com) is doing in partnership with Sprint in the United States, makes little sense, as thousands (or possibly millions) of viewers simultaneously tuning in for live data streaming of Japan’s winning goal in the next World Cup would significantly degrade performance of the overall network. This would negatively impact voice and lower-bandwidth data communications (like email and browsing), the fundamental elements of the mobile platform.

To solve this, many carriers (including KDDI) are now developing or trialing services in which TV content is not streamed over their existing data network but instead programs are broadcast directly from the broadcaster to the mobile handset. This brings us back to those R&D subsidies traditionally provided by the network operators to the handset manufacturers. If a keitai user tunes into a direct broadcast from NHK, with absolutely no interaction (and therefore no revenue stream) with the mobile network operator, why would any operator continue to subsidize TV-capable handsets?

And if these handsets become more expensive to the end user, is mobile TV truly a “killer application” for the MobileNet that warrants such an investment? The Nikkei Weekly recently reported that consumers were foregoing technology-complex handsets for far simpler and less complicated models. A high-priced, TV-capable handset may make a strong statement about one’s earning power, but most likely will not command high sales volumes.

Second, recent research in many markets has shown that the MobileNet is used most often during “between” times, when a consumer is in between scheduled events in their daily lives.

Considering the competing platforms for TV viewing when at home, such as a full-sized GOFTV (good ol’fashioned TV) or a TV-enabled PC, the keitai’s tiny screen will always make it a sub-optimal choice. This means then, that watching TV on one’s mobile phone will mostly occur outside the home — during these between times. Current content choices on the MobileNet revolve around those activities that can fit in to an individual’s changing external environment.

For example, while waiting for friends for five to ten minutes, reading and responding to email is a natural fit, as is looking at current news, etc. As Mimi Ito has shown in her groundbreaking work, individual users mold their usage of the MobileNet to variations in their environment. But TV programming however, follows a pre-determined schedule. By the time users connect to and then find the most appropriate program (assuming, of course, that they are able to do so) they will either have missed the good stuff or be forced to tune out right when the good stuff is happening.

One of the great advantages of the MobileNet is that it can be melded into the ongoing flow of living our daily lives. TV programming, on the other hand, requires users to exit that flow, something that suggests that such programming in its current form will not be widely accepted or used by consumers.

Sure, to address this issue, broadcasters could develop “short attention-span” programming specially developed for the mobile platform.

But such content lends itself better to video on demand (VOD) services rather than live broadcasts (making a mobile TV tuner unnecessary); also the prohibitive costs for content development make this scenario unlikely.

Another solution could be that keitais gain digital video recording (DVR) capabilities. This could actually be a viable solution, and is likely already under development.

Even with this advance, however, consumers would need to alter existing behaviors, something that is often difficult for people to do.

What might make more sense and require less behavioral modifications would be for DVR owners to record programming on high-capacity mini-SD cards or Memory Sticks and simply replay the recorded content on their handsets during their “between” times while out and about.

This is, in fact, precisely what dominant carrier NTT DoCoMo has shown in their pre-commercial mobile TV handsets shown to the press earlier this year (the phone comes with a base station that integrates a high-capacity hard drive to record live TV for transfer to the handset and later, off-line, mobile viewing)

This again suggests a potentially bleak future for handsets with embedded TV tuners.

The integration of the keitai and the television will continue to make exciting press releases and news stories for months to come, but the underlying business models and actual consumer usage patterns call into question the long term viability of such plans.

Only with the introduction of innovative new business models, technologies, or service packages that minimize the negative factors associated with keitai-TV usage will such services succeed. And in speaking with and having the luxury of teaching some of the brightest minds in the mobile industry, I’m sure that such innovations will eventually emerge. But as we wait for these developments to occur, it is clear that today’s excitement about mobile phone/TV convergence will remain purely hype.