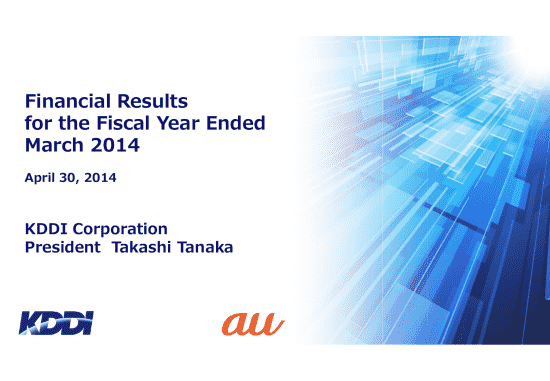 Full IR Financial Statement, in English Here [.Pdf]
Operating revenues for the year ended March 31, 2014, amounted to ¥4,333,628 million, up 18.3% year on year. This rise stemmed from higher data communications revenues, owing to a steady increase in customers using “au Smart Value”, and to the ongoing shift toward smartphones, revenues from terminal sales, as well as contributions to earnings of J:COM, as this company was included in the scope of consolidation. Operating expenses increased 16.5% year on year, to ¥3,670,383 million. Although mobile handset migration expenses (such as point expenses and outsourcing expenses) that were of the preceding fiscal year decreased owing to the conclusion of service on the former 800MHz frequency, expenses increased due to sales commission for stiff competition, terminal procurement in line with the shift to smartphones and the inclusion of J:COM in the scope of consolidation. As a result, operating income surged 29.4% year on year, to ¥663,245 million. Ordinary income increased 28.9% year on year, to ¥662,887 million, owing to such factors as deteriorated performance at equity-method affiliates.

In the preceding fiscal year, KDDI Group (hereafter: the “Companies”) posted an extraordinary loss of ¥104,860 million stemming from impairment loss and loss on retirement of noncurrent assets, due to the discontinuation of use of former 800 MHz facilities. During the current fiscal year, the Companies recorded a substantially smaller extraordinary loss, of ¥50,347 million, arising from a loss on step acquisitions from the purchase of additional shares in J:COM. As a result, net income for the year ended March 31, 2014, jumped 33.4% year on year, to ¥322,038 million.