The full presser video runs about 90-mins, link to dedicated page for new handsets here and overview via their corporate website machine translated below.. lots of points for us all to wade through [Eds] 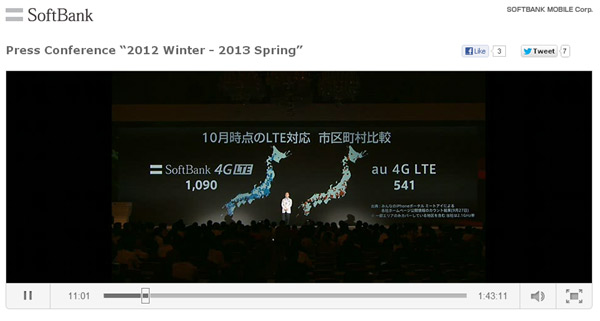 October 9, 2012, SOFTBANK MOBILE Corp. (“SOFTBANK MOBILE”), the New Product Presentation – including the high-speed communication smartphone that can be held the “2012 Winter 2013 Spring”, corresponding to “SoftBank 4G” high-quality video content has announced a new service, such as “SoftBank SmartTV” enjoy on TV and just plug and 11 types of new products, the stick.
Build a high-speed network that connects

Say against touching the topic of Professor Shinya Yamanaka of Kyoto University, Nobel Prize has been decided the day before, “is more of other scientists” and “can, Masayoshi Son of Softbank representative group on stage, mountains I said I, “I think the spirit is so even though you might think the professor said,” do it. “seemingly impossible” I do as well as what “is, and I think things evolve significantly. Furthermore, competition, continued “it” and “there is one more thing you are feeling well lately” “is that how wonderful how. Too us, to see how your competitors are work hard,” as what Beyond that I said also “think about our various efforts such, are working day and night in the thought of. Today, I want to talk about some”, I explained about the network of Softbank Mobile.

“Not only is entering a competitive age smartphones, will lead simply has become important or connected with how fast” networks that serve, provided by SoftBank Mobile grandson, fast “and” easy connection ” I explain, “Sa. First, about the “ease of connection” is, we have reported that by the acquisition of Platinum band has been steadily expanding its service area.
Also, I was referring to, such as that for “speed” has been steadily expanded and it has been working on the expansion of the “Softbank Wi-Fi spot” and pioneer of the competition, but also the access point corresponding to 5GHz. In addition, as a new service, 75Mbps maximum downlink ※ 1 scheme FDD-LTE to achieve high-speed data communication with the “SoftBank 4G LTE”, throughout the service area is 110Mbps maximum downlink ※ 2 “SoftBank 4G” system AXGP that corresponds to the I explained again that it provides a high-speed network in two.

Corresponds to the “SoftBank 4G” smartphone all models
The grandson said, “SoftBank smartphones announced today, all models boast a maximum speed domestic” and “corresponds to the” SoftBank 4G, he began to introduce each model and.
First, “AQUOS PHONE Xx 203SH” grandson has introduced (made by Sharp). In addition to the LCD 4.9 inches HD large screen and high vividness, is equipped with a “Dolby ® Mobile v3″ high quality, “AQUOS PHONE Xx 203SH”, the CPU is the 1.5GHz quad-core CPU with a performance high-speed processing ” “Specification of the best among the compatible models” It is a model that boasts (grandson) “SoftBank 4G”, practical and adopted a “APQ8064.
In addition, “ARROWS A (ace) 201F”, “STREAM 201HW” (made by Fujitsu Mobile Communications), “RAZR ™ (laser) M 201M” (manufactured by Huawei), “HONEY BEE 201K” (made by Motorola) (Kyocera) , “PANTONE ® 6 200SH” introduced sequentially for each model (manufactured by Sharp).
Said, “in order to be able to use it more conveniently enabled smartphones, to strengthen cooperation with Yahoo! JAPAN” SoftBank 4G “these” grandchildren, and further, he can be used as ID of Yahoo! JAPAN phone number of the smartphone , I discuss cooperation initiatives such as ID.
At the same time, I also announced that all models of smartphone SoftBank announced that this time corresponds to the “tethering” December 15, 2012.

Then, on stage TV CM Shin Kaori Mochida group Every Little Thing popular music (“ELT” known), Mr. Ichiro Ito and Aya Ueto, a guest appearance, also appeared in two persons of ELT will be screened underneath. But in order to spread the word “LTE” CM This will ask you to rename the “LTE” ELT, but it is the content of refuse. However, I was wowed venue to declare if you ask grandchildren want to rename the “LTE” to two people of ELT again, Mr. Mochida accepts the this what the “! Working as LTE future.”

“DM013SH” new models of Disney Mobile, “DM014SH” (made by Sharp) “PANTONE ® WATERPROOF 202SH” new models and (made by Sharp), and feature phones SoftBank Mobile grandson, after introducing (manufactured by Sharp), and “PhotoVision TV 202HW” we discussed (manufactured by Huawei). “PhotoVision TV 202HW” is the first in the world ※ three , a digital photo frame with integrated 3G communication with Seg to enjoy digital terrestrial, since it also has a waterproof function, “and you can also watch TV in the bath, photo I emphasized the appeal “and its excellent thing that there is also a function of the stand.

“Sumatere and” Service “UULA” new
On this day, a new approach (“Avex Group Holdings” below) in conjunction Avex Group Holdings Inc. and Softbank Corp. (“SOFTBANK”), and entertainment services “UULA (Ula)” General called for smartphones service was announced. “UULA” is a service where the content of more than 50 000 such as movies, music, and video animation Live will be seen in the 490 yen per month unlimited. Launch is scheduled for December 2012. Also appeared in Mr. Masato Matsuura CEO President Avex Group Holdings on stage, “get a partner there is pride that has made the movement a variety so far. Called Softbank again, Avex,” UULA I was told the enthusiasm, “I think I want to launch a new movement.”

It was also announced service “SoftBank SmartTV” also new (“Sumatere” below). Under Wi-Fi, just plug into the TV with a HDMI terminal stick-only, and video works of this about 40,000, such as new movie of Service “TSUTAYA TV” video delivery, “Sumatere”, the channel service “BBTV NEXT multi- “more than 50 specialty channels, video distribution services” free of GyaO 2,000! ” four ※ It is a service such as video work can watch on TV. I do from SoftBank smartphones. All the members of the house Shirato be on stage on stage, “to keep up (various services), so the evolution rapidly, but it is hard, is likely to be for me to just insert the stick” Kanako Higuchi and this “mother” ( “It quickly found some new, happy home is in like became TSUTAYA”), the acid has been described, etc.) and Aya Ueto (this “Aya”, the impression of “Sumatere” severally.

I think in the end ‘in the future, grandchildren and I want to work hard in a balanced manner, such as content services terminal network, in all aspects. In overall strength of the SOFTBANK Group, so that we can provide a service given the truly inspiring people “We work hard, I concluded the recital.