A 3-part series by @WSJ on the so-called Galapagos over the last few days, here’s our quick “Ya – But” respond: http://bit.ly/S0xH0k 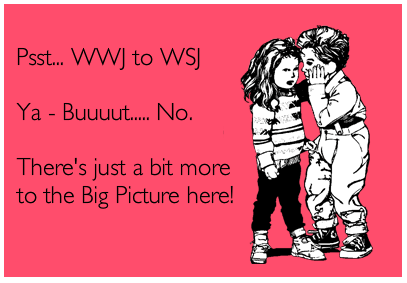 We generally just bite our tongues and try to ignore these occasional generic descriptions, but three one-sided digs in as many days..?!?

Apparently this “Short Circuit” series requires a bit of perspective. Whatever happened to credible mainstream media reporting stories with balanced scope, just a little bit of depth, on the ‘Why is that’ angle.

We are not raving fan-boys, dizzy on the ocha-flavor kool-aid, just trying as always to call a spade a shovel. These three articles fail to mention – At All – several of the most critical aspects, which are widely known and understood within the industry, what’s up with that?

So, here’s our speedy and (ahem) thoughtful response below.. for what it’s worth – Yoroshiku!

How Japan Lost Its Electronics Crown
Zero consideration of the Component Business..?!? Whether you look at domestic or global sources; various estimates show perhaps 40% of internal parts for All handsets in the world – regardless of the brand maker – come via Japan. The local ODM’s made a clear B2B sales channel choice long ago; from displays to batteries and beyond – they continue to dominate that ‘black-box’ space. Also glaring error to ignore the entire 3G / LTE platform sector, and importantly the related “Essential IP” that connects billions of phones globally to a network in the first freakin place, again = born and bred in Japan.

Japan’s Dimwitted Smartphones
Umm.. the ones running Flash with NFC and Digital TV, not too mention full-blown flat-rate 3G web, since like 2005? It’s somewhat simplistic, at best, to describe a device by form factor as opposed to function. Much of this article recycles the same as above, one further point we should note now would be the Open Handset Alliance – OHA, or ‘Good Morning’ in Japanese. To insist as fact that players here totally missed the trend is to ignore they were instrumental in setting up the group which basically built Android. This is not ‘secret’ and we’ve mentioned it before, it’s unfortunate that both sides – for better and worst – of these industry efforts are not articulated by a perceived news source of status.

Missed Call: How the iPhone Conquered Japan*
[*Update Aug. 21st: Suggest Google their original title as we note it's since been changed -- Eds]

Whew.. we need to split that little gem into two parts. First, no offer of a credible source with numbers? Neither Apple nor their local partners have ‘ever’ released official volumes, it’s a best effort guess from 3rd parties. This report via MCF has ComScore results from Dec. 2011 with iPhone at 5% Japan market share, Android 2x that base & growing much faster YoY. Has it done well, sure – but conquered.. #_#

Second, the iPhone platform is almost an exact copy of iMode model circa 1999. Steve Jobs spent plenty of time here back in the day, where do you think his black turtlenecks came from! Essentially, Apple is DoCoMo in the value-chain; they control the handset specs – built to order, channel locked – and manage the content deck with revenue share. These “Walled Gardens” used to be a dirty word with overseas media, now it seems a ‘tightly integrated approach’ makes perfect sense.. funny that huh.

So, the ‘Galapagos’ serves as both beacon and enabling resource for next-gen. mobile – worldwide.
Perhaps then it would be more accurate to define, if you must, Japan as Atlantis 3.0 instead..

Now.. we could walk the talk – fair & balanced – with an eye on the dark side, as obviously it’s not all nama-beer and lollypops. But that’s enough for one day, sweltering here in the concrete jungle that is Tokyo in August. Besides.. maybe they’ll do a post looking on the bright side yet.. meanwhile = TGIF!