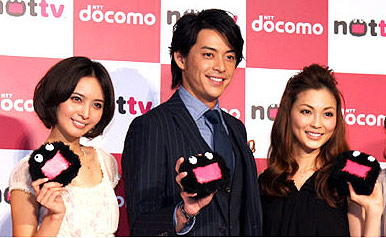 As we have followed this path over the last few years it was somewhat of a milestone moment here at the posh Roppongi Hills on Sunday as for the official debut ceremony of NOTTV. While – as usual – there was very little fanfare in English, we feel this rev. 2 of television broadcast for mobile will prove yet another industry benchmark in years to come. Here’s a quick primer on the ISDB-Tmm tech. platform for those interested.

Review several of our back-story links below along with round-up here for the company website, dedicated content section on NHK along with launch coverage from Keitai Watch and blogger hands-on reviews via IT Media and the 4-page report by the Nikkei [all in Japanese]. While there are only two enabled devices on the market little doubt that production will ramp-up going forward.. congrats to all involved, looking forward to see how long it takes now for KDDI and SoftBank to join..!?!