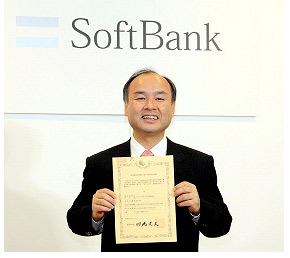 Today SOFTBANK MOBILE Corp. (hereafter â€œSBMâ€) received the Ministry of Internal Affairs and Communications’ approval on its 900MHz band specific base station plan, which was submitted for approval on January 27, 2012. The purpose of this application was to cope with the dramatic increase of traffic, enhance coverage, and build a robust disaster-proof communication network. Upon this approval, SBM will start to construct the 900MHz mobile network. This band, also known as â€œPlatinum Band,â€œ will enable more efficient and wider coverage compared to the existing SBM band. Communication services using the 900MHz band are expected to launch on July 25, 2012.

The approved base station plan incorporates the installation of approximately 16,000 base stations in fiscal 2012, to be expanded up to 41,000 by fiscal 2016, providing 99.9% population coverage.

After the acquisition of Vodafone K.K. in 2006, SBM made a clear commitment to enhance the network, and double the number of base stations, which were 21,000 at the time of the acquisition, to 46,000 by August 2007. In accordance with the SoftBank Network Enhancement Initiative announced in March 2010, the number of base stations reached 180,000* as of today. SBM has been making every possible effort to enhance network coverage, including installing SOFTBANK Wi-Fi Spots at 240,000 locations nationwide, in order to improve its data communication service. In order to offer even higher speed data communication services, SoftBank 4G using 2.5GHz was also launched on February 24, 2012.

With the approval of the base station plan, SBM will utilize the wide coverage advantages of the platinum band to build a comprehensive communication environment and lifeline network which is robust and disaster-proof, not to mention handling the increasing traffic and introducing new communication technologies, such as LTE.