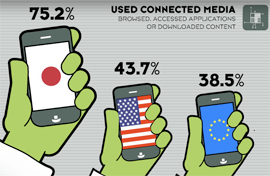 The Mobile Monday Silicon Valley Spotlight on Japan was held this week, sadly our super-silly schedule and travel arrangements conflicted. That said, we were happy to help the Mobile Monday crew in Silicon Valley, as possible considering the most difficult times here over this last few months, to build a fantastic line-up for their event.

Of course the mobile industry is clearly gaining strong international momentum over the last few years and it makes perfect sense to gather some interesting players, from the world’s most dynamic market, to share their stories. While we are naturally thrilled to see the current growth path overseas; it was somewhat ‘curious’ to read the lead text on their announcement, which boldly stated: “..the US has unarguably assumed the leadership position in mobile”, especially considering the graphic above!?!

Unarguably (heh), whether it’s the iPhone or Android, their platforms, technologies or components involved = Japan clearly blazed those trails. Ultimately.. usage and revenues here, with only 120M subscribers, continues to impress. We’d humbly suggest the 2010 results via RIAJ on Mobile Music will add some perspective in that regard. As for 3G adoption – therefore ARPU – not yet young Jedi

At any rate, we made some notes to follow along with the event video below. Full Kudos for all fine efforts to organize this show – in the spirit of Mobile Monday – Bringing the Mobile Industry Together!

Opening – Mario Tapia – Mobile Monday Silicon Valley
Mario is mobile director at GetJar, he has done countless hours of NPO work to drive MoMo events in the valley. A quick fact check note on his comments about the Mobile Monday Global community; we count over 120 city locations worldwide with Manila just launching on May 9th, and perhaps 20 chapters across North America. Extremely useful to see the on-going survey results taken via their online event registration form.. keep-up the great work there bro!

Host – Tim Curley, Dir. of Business Development, Palo Alto Research Center
How totally freakin cool is that.. hosted at PARC.. the legendary home of innovation with way more landmark name-dropping goodness than we’ll take time to mention here – see the full history of this institution via Wikipedia, designed by Gyo Obata no less! Massive thanks to the kind folks there and certainly expect some real interest expressed on the Mobile Context Aware API Tim had mentioned, perhaps this .PDF would be good starting point for that.

MC – Scott Ellman – USAsia Venture Partners
Great ice-breaker to fumble the mic. and graceful recovery dude, no encore required! We have always been rather fond of our tagline: “Reporting from the Heart of the Mobile Revolution”, however, his opening remarks with reference to Japan as “Cradle of Mobile Civilization” has a nice ring to it as well. Scott did a super job to keep the ball rolling.. perhaps all prezzi’s loaded onto one lap-top would help move things more smoothly along in the future..

Gary S. Brown, Director North America – Morpho Inc.
The first of two presenting groups who are funded in part by University of Tokyo Edge Capital, this company is long-established and dedicated to camera-phone imaging solutions. He did make some ‘interesting’ comments with respect to the difference in business culture between Japan and the U.S., from first meet to closing clients on new product offers. In our experience that initial Hajime Mashita is usually more like a polite first-date, although considering the profile and partners involved we can imagine some fast-tracks in order to get on with making a deal. Certainly, mobile photo technology has long-been a huge business – not just in Japan – and these guys quickly became major players.

As for the sales model, Japanese companies may indeed be happy to fund a strong concept & team (DoCoMo alone spends est. $1Bn on R&D annually) vs. American players wanting to see the actual working solution on their platforms. Fair enough, but then again looking at the company shareholders; DoCoMo, NEC, Panasonic etc. guessing there were stock strings attached to develop such products. Based on the teams University of Tokyo pedigree – think MIT and Harvard.. combined – little doubt they would be able to actually deliver on those proposed visions.

One other note of interest is related to the QuickPanorama product; deployed by SoftBank Mobile in March 2007, now available in the App Store as well, while the company did joint-development work with Tokyo-based Acrodea to incorporate that within the widely deployed Vivid UI suite. Otherwise, thankfully Gary was on-hand to help with some quick interpretation during the Q&A.. Cheers!

Hal Seki – Chief of Cirius Labs – Cirius Technologies, Inc.
Cirius Technologies has been well ahead of the curve in the location-based space, launching their AdLocal product in 2006, opened U.S. office 2009, and acquired by Yahoo Japan last year. Seki-san mentioned FeliCa NFC, Osaifu Ketai, numbers at 37M, guessing he meant specifically on DoCoMo alone as we estimate that number closer to 75M across the total market. He also said that Yahoo recorded 54Bn mobile page views in March this year and made very clear for all gathered that the smartphone model design is ‘growing really fast’ in Japan. Otherwise, he introduced the YOLP – Yahoo Open Local Platform API – Wow… we can just imagine those heat-maps blazing over the coming years..

Ken Kito Nico Nico Douga = Smile Video
If you don’t know NicoNico.. imagine Youtube with a Twitter-like stream of comments layered over top.. it’s Great Fun! We hosted the founding team here at Mobile Monday Tokyo in June 2008, and they have recently launched an English beta website for the PC so you can even try it for yourself.

A shame James Spahn, the MD and co-founder for operations in the U.S. was unable to attend but Kito-san gave his best pinch-hit effort explain, citing an example of their crew doing live-cast of the Endeavor shuttle launch on that same day clocking some 65k viewers. Thankfully, in many ways, the product speaks for itself! He noted they now have 25M registered users as of Feb. 2011 – est. 30% of the youth population in Japan – with just over 1M at the premium level, which is about $6 per month.

Dwango, the parent Co., managed to attract Natsuno-san, so-called Father of i-mode, to become a Managing Partner there and we stumbled across his quick deck via W3C event held last year at Keio University. Finally, thought we should point-out that they have just opened a physical location, in the uber-trendy Harajuku district, close to the KDDI Designing Studio.. very slick!

Yusuke Asakura, Hajime Hotta and Miku Hirano – Naked Technology, Inc
This was By Far the most interesting and entertaining presentation of the night! Led by the energetic CEO, Yusuke Asakura along with cho-kawaii Product Manager, Miku Hirano and talented PhD & CTO Hajime Hotta, who was formally with the above-mentioned Cirius group back in 2005. The company is also supported by UTEC and made a great pitch based around the debut release of their PotoPhoto Android application. For those who have heard of the social network photo sharing platform Color, this seems very much alike, tho. guessing it came in at well-under $40M.

Interestingly, they had rolled a framework in order to ‘manage mobile applications on various platforms in the cloud’ back in 2008, and it’s called… Colors! Claiming current stats of 2M users, with 50% active rate, capable of running on 200+ devices across all three main operator networks in Japan. We’d bravely suggest that Ted Yamamoto has a super-cool play shaping-up with this crew!

Takufumi Kawane: Vice President, Business Operations – GREE
The final speaker for the evening came from GREE, likely the most famous of the assembled group. The company launched here in 2004, with a focus on Mobile Social Gaming, and quickly went public with a current market-cap of a whopping $4Bn. They have just opened offices in China and the U.S. making a series of strategic investments, including Mig33, are part of the new $100M A-Fund and made recent high-profile acquisition of Openfeint, increasing the total combined user-base to +100M (plus a wild-card in play with recent Tencent JV for China!). Interesting aside, as we were searching through past WWJ posts, stumbled across this 2009 notice by long-time fierce local competitor, DeNA, announcing a 20% share-purchase of the original AuroraFeint..!?!

Anyway, GREE is forecasting $700M in revenues FYE 2011 – several hundred million from virtual goods alone – touting a 50% profit margin and demonstrating serious growth over the last 3-years. In Japan they have 25M registered users and this mobile-centric platform claims 550 page views per person Per Day [=14Bn], with $2.2 Average Revenue Per User or 15x ARPU compared to FaceBook.

As Kawane-san noted in his ‘most important slide’ the Company is Hiring! However, we’d say perhaps the most valuable comments of the evening came via his Q&A segment regarding ‘keys to success’ for market entry. 1- Platform; hence their move with OpenFeint, Congrats Jason, 2- Content; it’s still king, 3- Users; fundamental needs the same across regions and 4- Partners; always open for growth..

Whew.. there you have it. Since we could not be there in person, certainly hope this extra effort – yes, it took a ‘few’ hours – helped add some context to the combined value put forth by everyone involved. Finally.. a special shout-out for Akemi Koda, who was the original driving force on this project, as she worked really hard to from the original concept all the way through delivery of a fantastic program!