With Apple, Motorola, Sony & Toshiba all introducing their latest next-gen laptops in Japan this month – here’s a quick roundup: http://bit.ly/ktWGId

Softbank mobile company puts the Wi-Fi model and the Wi-Fi+3G model of “iPad 2″ (made by Apple Computer Inc.) on the market on Thursday, April 28, 2011. 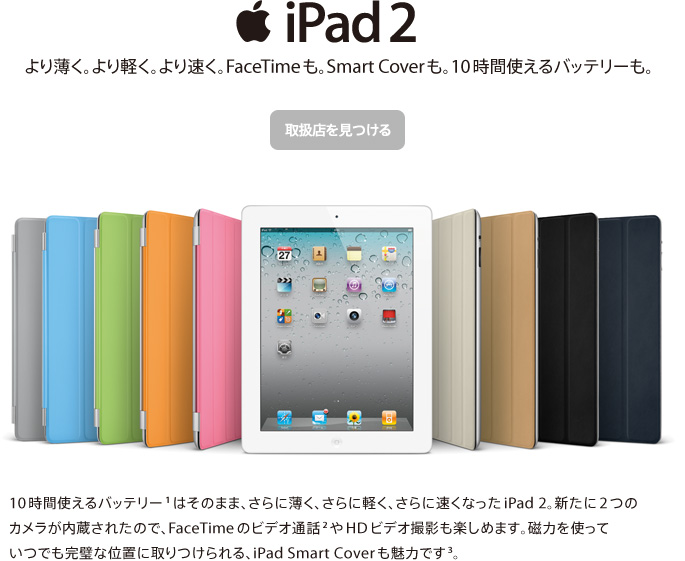 IPad 2 is the second generation of reformative device of Apple model whose it is 33% thinner than the current, more maximum, it is 15% lighter, and feature of LED backlight LCD screen of 9.7 inches where past iPad is beautiful was quite new design to the state as it is. Two cameras are installed in iPad 2 by dual core A5 processor that Apple is new besides a fast surprisingly performance and a beautiful graphics are achieved. The VGA camera installed forward can be used for FaceTime(R) and Photo Booth(R), and the backing camera corresponds to the HD video shooting of 720p. The iPad user came to be able also to use a reformative FaceTime function by these for the first time. IPad 2 has battery drive time * at most for ten hours, and answers the user’s expectation though was fully loaded of a thinner, lighter, faster new features included.

It is the Softbank mobile President and Representative Director , saying that “Think can the sale of iPad 2 in Japan to be a very joyous” CEO Masayoshi Son is describing. “Softbank mobile executes the Wi-Fi+3G model and it is from a substance load amount 0 yen and campaign ‘iPad 2 for everybody’ that can be bought is executed until Friday, September 30, 2011.”

Android 3.0 that is designed for the tablet, and optimized is installed in “MOTOROLA XOOM Wi-Fi TBi11M”. As a result, the easiness of the multitask and the widget to use improved, and a comfortable user interface only of the tablet that had a large screen was achieved. Moreover, high-speed dual core chip “NVIDIA(R) Tegra 2″ can be installed, and it enjoy the animation reproduction, 3D display of the Google map, and the web browsing more comfortably earlier.

The display can install 10.1 inches tall minute liquid crystal that can reproduce the animation of a full HD image quality, and enjoy animation and the web browsing on a large screen. It is possible to hook up to the Internet to a broadband line such as “Au shine” indoors by way of Wi-Fi equipped with the Wi-Fi function and to use it. Moreover, it is possible to use it by using “Wi-Fi [tezaringu]” function of “HTC EVO WiMAX ISW11HT” (note) in addition to public wireless LAN coverage in outdoor even in the WiMAX area and the CDMA area.

Android tablet 3.0 “HoneyComb” is installed.
The browsing is smooth in the dual core chip.
On and off : to smart.

The convenience only of the tablet from the movie watching of the bedroom to the production of the presentation material of work to the hand with this one.

Latest “Tegra2 processor” made of dual core NVIDIA is installed. The reproduction of Flash contents is possible, and it corresponds to the reproduction of full HD animation of watching and 1080p of YouTube. The output to the LCD TV etc. that use the terminal HDMI is supported. The evolving expression by 3D graphic engine also colors the map and the application program by vivid real.

Two cameras have been installed: Two million-pixel camera used for the video chat etc. is installed five million-pixel back camera and in front of in which it can take a picture of the HD animation of 720p. It provides with the acceleration sensor, the electronic compass, and the giro sensor, etc.

Hands on with New Sony Tablets

Sony will take its first step into the tablet market later this year when it launches two devices. Prototypes of the two tablets were previewed at a Tokyo news conference on Tuesday, but what are they like to use? On Tuesday evening I had a brief chance to try them out.

The two tablets are very different devices. The larger of the two, code-named S1, has a 9.4-inch screen that takes up most of the front. The second tablet, code-named S2, has a clamshell design with twin 5.5-inch screens and can be folded so it fits in a jacket pocket or bag. Some might argue this design doesn’t technically make it a tablet, but it runs the same Android 3.0 OS and has much in common with the S1. 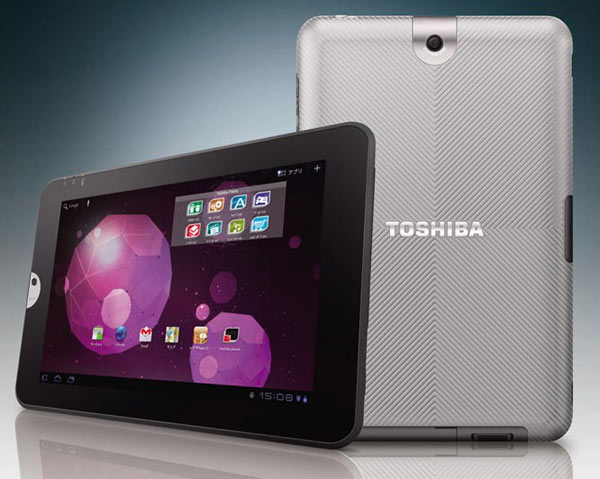 REGZA Tablet develops as a series that proposes a further use scene of the tablet equipment while succeeding to the feature of “High-resolution”, “High sound quality”, and “Easiness to use” that audio-video equipment â€œREGZA” series and series of PCâ€œdynabook” have been pursuing.

Tegra 250 and the memory 1G byte of the touch panel display of a wide display/1280Ã—800 dot 10.1 type (equipped with electrostatic capacity method and power saving LED backlight) and 1GHz operation, and the main specification is flash storage, and IEEE802 in 16G byte. Camera and mike/headphone I/O etc. of wireless LAN in accordance with 11b/g/n, telecommunication facility of Bluetooth, SD memory card reader (bridge media slot) for SDHC, and 1 and two million pixels in the front side and USB 2.0(Standard-A) Ã—1, Mini USBÃ—1, and HDMI output (terminal of normal size)Ã— back five million pixels. The inclination sensor etc. that synchronize with the direction of the screen by Android 3.0 are installed in OS, too. 3G data communication function is not installed.

In the size of the main body, 15.8(thickness) milli and 177(width)Ã—273(depth)Ã— weight are about 765 grams. The battery operation time for about seven hours when the animation continuousness reproduces. The back panel of the mule finish is removed, and the exchange of the batteries is enabled.