Considering the historic event unfolding over the last 24-hrs, here’s our quick personal review of the earthquake http://bit.ly/dHaJoG

Ok.. it’s a bit early to be writing this, less than 24hrs after main impact and real concerns about nuclear power plants still circulating, but thought I would do ‘something’ now while everything is relatively fresh in mind. Suppose it’s fair to say that after such a massive earthquake, followed closely by a tsunami on near biblical scale, folks around here a bit edgy when you add potential Nuclear Power melt-downs on top of in such short order.. what a day.

Friday March 11th started sunny and warm for us here, with a dozen deliverable tasks on my home-office desk and thankful I had no meetings planned downtown. By about 2pm was making good progress on the to-do list and had that usual TGIF feeling.. 45-mins later our world was Really Shaking and felt Actual Panic as it became increasingly clear this was not just another regular quake.

I know it must sound strange to people who have no experience with daily life in Japan, I was one of them once upon a time. Simply put; it’s routine to have the odd bump – like being on a boat or turbulence on a plane – basically not so bad once you get used to it. Of course there have been a few “memorable events” in my near decade here, all good reminders that the beast below is not always so calm.

At 14:46 local time my casual in-difference changed.. dramatically. The standard side to side sway was far more violent and several vertical shudders had me standing and holding-on to my 36″ main-screen. I managed to post quick Tweet via @video_link: this is WAY MORE FREAKY than the other day! (we had above average jolt March 9th). Looking out the home office window towards Mt. Fuji.. was Seriously fearing what I’d see.. whew = Ok.

By about 90-secs, obviously not watching the clock, my coffee cup had already splashed near empty and it tipped off the edge of my big heavy work station.. genuine concern setting in. As things tend to go into slo’mo at times like these, I recall thinking ‘well at least the windows aren’t breaking.. yet’ thankfully no broken glass in the end after-all.

Clearly this was not any given workday all of a sudden. The power had clipped off, I’d sent the wife an immediate text; “mobile network is down..” voice call.. f*ck. So, made my outside, navigating through a not so fun-house ride, for a cigarette. A zen moment smiling a bit-crazed to myself: “Looks like I picked the wrong week to quit smoking”. It seemed like things were calming down, comparatively, and power was back again in like 15-mins, so hit the TV. NHK was rolling scenes from their office up in Sendai, indeed a major event. As the reports started to trickle-in, epicenter was M8.9, under 400km NE of Tokyo at shallow 24km, the warnings were blazing bright red across all channels for impending Tsunami.. #_#

We’re about 20-min drive from the ocean.. and on fairly high-ground. I managed to get ahold of the wife via landline, she was Ok and ‘pretty sure’ there was no need to run. Then came strong M7+ after-shock, and another, in fact we soon lost count of how many over the coming hours with well over 50 in total now by some reports. A helicopter above Ishinomaki was streaming epic live footage of waves washing across the land, speechless knowing full well that so many people down there were fighting for, and losing, their lives.

It was certainly surreal, sirens wailing here with choppers and C130′s from nearby Atsugi base overhead, this was really happening.. and I just wanted (not even remotely possible) to get to ground zero with my camera. Of course once the news hit CNN and BBC the contacts started – several hundred messages in-coming via mail, Skype, Twitter, FaceBook and Linkedin – many thanks to all for your thoughtful concern.. at times like this you know who your real friends are.

By about 6pm.. it was def. (long-past) time for a drink.. or three. Had posted quick notes to all my profiles and checked on my close circle of contacts here to be sure they were Ok (whew) as well. A steady stream of updates coming through, re-posted several, and finished-off what I could on my oh-so important to-do list from that innocent morning.

Now the local media was in full motion, with TV Tokyo announcers wearing hardhats in the studio, and it was getting dark in the metropolis. With all mobile networks still down, people were lined-up to use free payphones, and all metro subways offline = a general scene of chaos with traffic jams backed-up in every direction for miles, 10′s of millions of people affected. Beyond words, so very thankful I was not stuck on Oedo-sen at 100m underground.

The wife came home – ‘challenging’ day for her too – and we managed to clean-up a bit. Had dinner and a hot shower, again counting my lucky stars as my usual train home was not running so I would have been stuck downtown overnite. We had full operating utilities here while So Many out there were truly far (Far) worse off. Multiple reports stated it was the strongest quake by scale of magnitude, worldwide, in recorded history to strike near a populated area. The BBC reported impact here at “8,000 times more powerful than recent quake in Christchurch” a grim reality of the scale of loss sinks in.

As adrenaline was coming back to ‘normal’ in the wee hours, even miss kitty had returned from wherever she was hiding, we finally managed to grab a little sleep – wearing ready to run cloths with fresh emergency backpacks by the door. There were a few strong after-shocks during the night, but none strong enough – for long enough, to actually get us out of bed. We count ourselves most fortunate: Warm, Safe and Dry with full utilities with plenty of food and water. 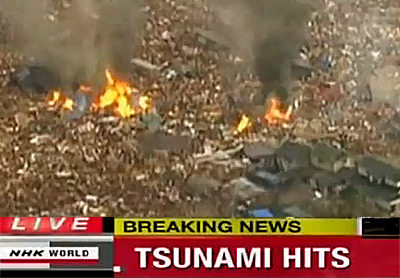 As the sun rises on battered nation, the coming days and weeks will be filled with stories of bravery and tragedy, not too mention repair cost estimates running into Trillion$. It’s difficult deciding how to close for now, suffice to say the country has long been prepared for the ‘big one’ and I shudder to think of how this story would have played-out near any other major city in the world. One of the many iconic images is this big old farm house; standing firm while surrounded by a fast moving tsunami on fire.. Pray for Japan.