The EVO for au story goes back to Last June – Congrats to UQ Communications.. Finally a Handset! [Eds]

KDDI(au) puts smart phone “Ibo WiMAX” in which high-speed wireless telecommunications in addition to a portable communication “Mobility WiMAX (Worldwide Interoperability for Microwave Access)” can be used on the market in the beginning of April. The role of the relay machine was given to a smart phone, and the function that the Internet was able to be connected ([tezaringu] function) also put the personal computer etc.

The sales assumption price : a new terminal for two years for 30,000 yen level in the contract made of Taiwan HTC in the first half. Mobile WiMAX is high-speed wireless telecommunications service on which “UQ communications” of the KDDI group works domestically. Download speeds of data are 40 Mbits highest per second, and it increases to about 13 times that of a portable communication of the past.

The user who exchanges a large amount of data like animation etc. changes to the setting that uses the WiMAX line by priority. It is said that the [tezaringu] function was able to be installed because the load to a portable telecommunication line is weakened by this. The notebook-sized personal computer and the tablet type terminals, etc. for nearby wireless LAN can be networked up to eight even if there is no fixed line.

The [tezaringu] function is installed in a wide terminal such as iPhone in foreign countries. The adoption by three major communication companies was the first time, and the [i-] mobility only put the installing terminal on the market domestically last December.

The use fee of WiMAX was suppressed to 525 yen a month (including tax). The data communication becomes a limitless use 5985 yen a month (It is 5460 yen in August) if it combines with the data fixed amount plan.

After the beginning of April, KDDI and Okinawa cellular put smart phone “htc EVO WiMAX ISW11HT” equipped with Android made of HTC corresponding to WiMAX on the market for the first time as a smart phone in Japan.

It provides with the multi touch display of about 4.3 inches, and a smart phone for “+WiMAX” equipped with the WiMAX telecommunication facility where the high-speed data transmission of descending 40Mbps or less can be done. Wi-Fi (wireless LAN) standard corresponds to IEEE802.11b/g/n. “Wi-Fi [tezaringu]” function that the handheld game platform and equipment for wireless LAN of note PC etc. can be connected up to eight is installed, and it is possible to use it as a mobile Wi-Fi router.

OS is Android 2.2 corresponding to the reproduction of Flash contents. It can watch animation etc. by putting up the main body like a portable television when it provides with in-camera, the microSDHC card slot, and the HDMI output terminal etc. of the main camera of about effective eight million pixel that can take a picture of the high-definition television animation of 720P/25fps and about effective 1.3 million pixel, and the kick stand in the back is used. The color is a black. In the size, it is 12.8mm(13.8mm in the thickness part) in width about 67x height 122x depth, and weight is about 170g.

The price plan is the same as other au smart phones. Only as for the moon using WiMAX, the “+WiMAX” monthly fee 525 yen is added to a basic rental. When WiMAX is used, it becomes objects of various packet fixed amount plans though it separately costs packet communication fees. The campaign to make the “+WiMAX” monthly fee free is executed to use in August, 2011. 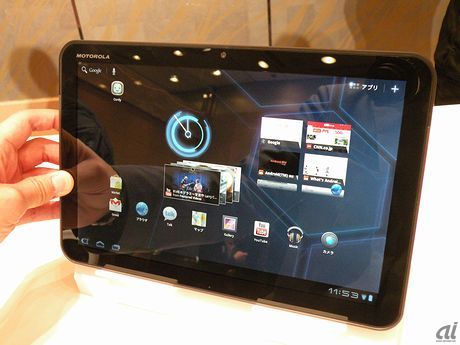 KDDI and Okinawa cellular announced tablet terminal “MOTOROLA XOOM Wi-Fi TBi11M” (made by Motorola, Inc.) equipped with Android 3.0 on February 28. The liquid crystal panel of 10.1 inches (1280Ã—800 dots) is installed. In the size of the main body, height is about 167mm, width is about 249mm, and thickness is about 12.9mm. After the beginning of April, the sale is scheduled.