FaceBook has implemented the ubiquitous QR Code for Japan mobile users to ease the sign-up and log-in process http://bit.ly/cGvPrW

Following test appearances on other Facebook products in recent months, QR codes are starting to show up in Japan. The company has been busy localizing its mobile site, m.facebook.com, in the country, and now it is using using the â€œquick responseâ€ codes to let users easily sign in. 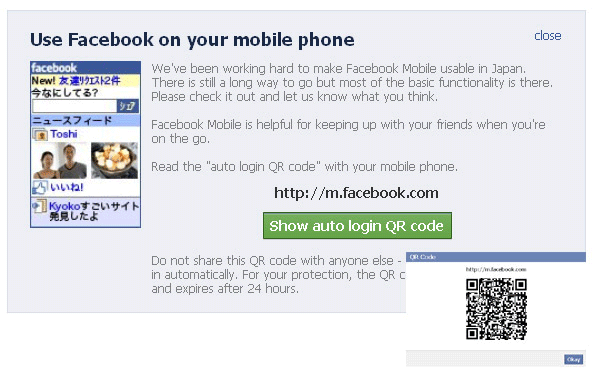 Currently, the QR implementation is just focused on getting more Japanese users on Facebook, a customization thatâ€™s likely a result of the company creating a local team to build out special products for the country. The screenshots are from a local source, and the code intends to get users logging in more quickly than navigating to the URL and logging in via typing. Full Story and screen-shots over at Inside FaceBook