Basically 1-Billion mobile page views per day.. seems everyone And their Dog are on MobageTown.. 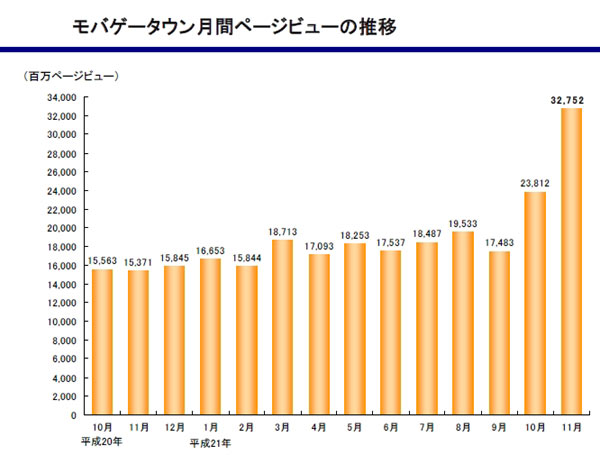 Page view of mobile portal site Mobage-taun that DeNA managed in November reached 32 billion 752 millionPV. It will expand to about 1.9 times in two months compared with page view (17,483,000,000PV) in September.

It is said that “Pirate Treasure”, and “Phantom thief Royal” of the social game turned on in full scale in the beginning of October will pull the expansion of PV according to the DeNA announcing to public. “After time passes, tend to play again ..element played while exchanging it with other users compared with an existing game… ” a lot. Both can be played free of charge, and item that sells the pay item that can be used in the game is adopted. Sales matched by three titles exceed 300 million yen on October 27.

In DeNA, “Phantom thief Royal” is delivered, and 350,000 people have been registering the mixi application program on the fourth since December 2. Moreover, the social game that the other companies developed is scheduled to be opened to the public one by one after January, 2010.