DoCoMo announced today that it will launch the trial operation of a network of environmental sensors on December 21 that measure pollen, carbon dioxide (CO2), ultraviolet (UV) sunlight and other atmospheric conditions. According to the press release they will make the aggregate data available to companies, such as pharmaceutical companies, healthcare institutions and municipal governments for use in various commercial applications. 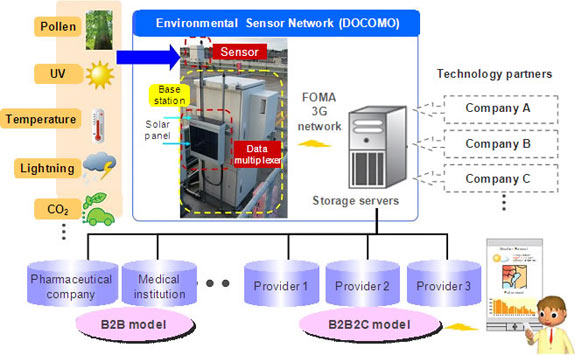 The network of sensors, the largest and densest of its kind in Japan, reflects DOCOMO’s ongoing efforts to leverage its mobile network and facilities to create new value in sectors including environmental protection, safety, security and healthcare. The network will take advantage of DOCOMO’s existing mobile network covering virtually the entire nation, including both urban and rural areas.

By the start of the trial, DOCOMO will have installed sets of environmental sensors in 300 locations within the Kanto region surrounding Tokyo and bordering Shizuoka Prefecture. The network is expected to be expanded to 2,500 locations nationwide within fiscal 2010 (ends March 2011) and then eventually to 9,000 locations.

Initially the network will offer data on pollen, followed later by data on CO2, UV and other atmospheric conditions that will be offered in cooperation with companies specialized in such fields.