We made our way to the DoCoMo press conference held at the Tokyo Forum here yesterday afternoon to witness the wraps-off event of their Fall & Winter handset series. Under the tag line “Version Up” the lineup featured a total of 19 new designs on offer, with 5 Sharp units, 4 models by Fujitsu, 3 from each LG, NEC and Panasonic plus 1 Samsung. Considering the range of new devices – along with service announcements such as Auto-GPS for i-concier, MyArea Femtocell with exclusive AV contents for the home plus several Blu-ray capable units – there should, at least hopefully, be something appealing here for everybody. Check-out this Flash Gallery or see the full 80-minute presentation Video Here. 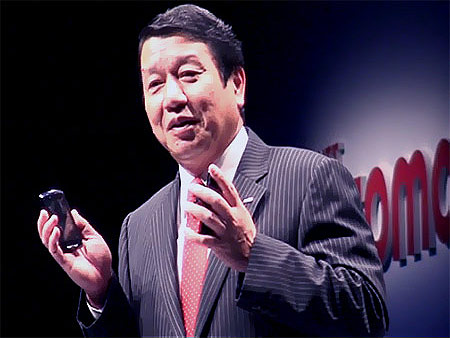 I always want the bad news first, since it helps balance perspective when followed by what is apparently ‘good’ news. So, the lack of rumored expected handsets, such as the new Xperia or Samsung JET, was a somewhat surprising disappointment. Nothing new from either HTC or Sony for this next fleet is sure to leave the techies wondering. Our gut reaction afterward was ‘not very impressive’ if only because it wasn’t Fantastic. Lets face it; DoCoMo has it’s own big shoes to fill.

That being said, all of the new models are running HS*PA speeds and most carry some form of latest next-gen standard features such as increased mega-pixel etc. Also, they have clearly targeted a younger female audience, and perhaps a shrewd nod to their salariman fathers who pay the family plan bill, with the Style series models by doing co-ops with Seventeen Magazine and a fashion designer model under the Samantha Thavasa brand. While the Samsung Pro-series model is running WiMo 6.5, the unit taking most media attention during hands-on session was the modular Fujitsu F-04B, RBBTODAY has Video Here. We expect to see more of this multi-part approach in designs going forward, makes you wonder which winning concept from 2009 we’ll see in the future.

As all eyes begin to focus on the fast-approaching LTE horizon, various initial launch plans here in 2010, the next handset lineups will certainly be most interesting!