ACCESS and Emblaze announced the ELSE platform together with INTUITION UI at the Westin Hotel Tokyo yesterday. PR [JPN] The Tokyo-based darling of imode with their NetFront browser – closing in on 1B units shipped – will introduce this new offering into the market over the coming months. According to various reports the “ACCESS Linux Platform v3.0″ took several years to develop and comes bundled with a slick “INTUITION” touch UI. While more details are expected on November 24th, apparently several EU operators are evaluating the product. Also of note, the presentation by President Kamada indicated that NetFront 4.0 browser is coming in 2010, with support for all the widget and html 5.0 goodies, and is touted to be upwards of 15x faster than current the version. 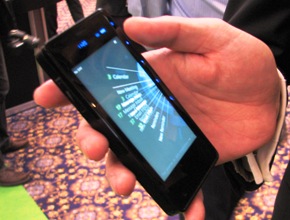 ELSE INTUITION is installing of user interface (UI) and the function that the two companies jointly developed in platform “ACCESS Linux Platform v3.0″ (henceforth ALP) for the portable terminal that ACCESS offers. It jointly developed spending two years. The function to control convenience was reviewed from one, and it pursued whether to make good one’s purpose according to a very short procedure. All the operations can be done with one hand.

There was an aim of fundamentally changing the idea of the development of the application program of another and the portable terminal into the review of the UI part. The terminal manufacturer and the career who is the customer always request service that can differentiate. It becomes easy to satisfy such a demand by completely separating logic and UI.

President Kamada : about the business development in the future. Our company is developing the media service, the application, and three businesses of the platform, and it is an application that contributes in terms of revenue that develops by the NetFront brand. However, I want to extend the whole greatly by the synergy effect in three fields in the future.

It is said that the number of installing terminals of the NetFront product increased by about 200 million a year exceeding 800 million totals recently according to this company. The part supported by a new market in China etc. besides the inside and North America where the number of the portable terminal of Japan is unable to move upward is large. It is thought that it makes it to the momentum of the business expansion by developing the platform business by ALP on the world scale.

Thee formal announcement of ELSE is scheduled to be done in foreign countries on November 24, 2009. It says now while overseas major career number company is evaluating it.

This UI can be operated by one hand in the one for the terminal of the overall touch panel. For instance, it can be operated to hold a strap. The one that manner of operation traces concentric circle menu displayed as shown in pie chart. For instance, “Dial (Dial)”, “Telephone book (Contacts)”, and “Sending history (Call Log)” submenus of the telephone appear when the telephone is done from the application list in the point, and the finger is moved toward outside of the circle. The application program starts when a target menu is chosen and the finger is separated.

In the lecture, first terminal “ELSE” equipped with ELSE INTUTION was announced. It is said that ELSE schedules the sale of the brand to begin the negotiation to two or more mobile carriers in Europe, and within 2009 now. Details are announced on November 24.

Another announcement : about “NetFront Browser v4.0″ of the offer schedule in 2010. The reproducibility of Web similar browser for the personal computer is achieved, and an intuitive interface that specializes in touch and a high-speed JavaScript engine and the HTML rendering engine are installed. HTML 5 of the latest specification is supported. In the speed-up of the JavaScript execution, it is said that it was possible to speed it up by 15 times compared with past NetFront Browser. Aim at the velocity as Web built-in a browser.

Moreover, the mechanism that the execution environment of a widget different in each mobile carrier is absorbed can be prepared, and the widget developed by a different specification be executed in NetFront Browser v4.0. Concretely, it is a widget written according to the specifications such as NetFront Widgets API, BONDAI, and JIL.